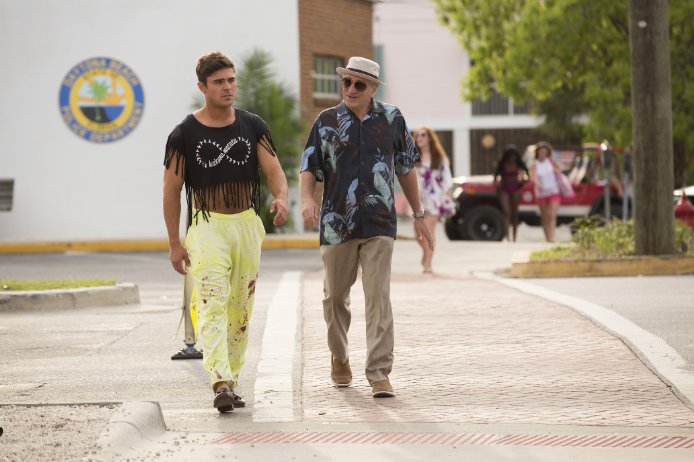 Released: January 22, 2016. Directed by: Dan Mazer. Starring: Robert De Niro, Zac Efron, Zoey Deutch. Runtime: 1hr 42 min. This comedy feels like screenwriter John Phillips lost a bet and since he lost, he had to write a screenplay with filthy joke after filthy joke. Dirty Grandpa is the result. This follows Jason Kelly [...]

Released: May 4, 2014. Directed by: Nicholas Stoller. Starring: Seth Rogen, Rose Byrne, Zac Efron. Runtime: 96 min.  Nicholas Stoller, a graduate of the so-called Apatow school of comedy, directs Neighbors, a film that is uncharacteristically short for Apatow's brand of filmmaking. In this way, Stoller makes this film his own. The film follows a [...]

Released: November 1, 2013. Directed by: Jon Turteltaub. Starring: Robert De Niro, Michael Douglas, Morgan Freeman. Runtime: 105 min. During "Last Vegas," I often sarcastically thought - I can't wait until I get old. I get to have those pill holders with the days of the week on them; have the constant threat of diseases [...]

Peeples Release Date: May 10, 2013 Director: Tina Gordon Chism Stars: Craig Robinson, Kerry Washington, David Alan Grier Runtime: 95 min The comedy genre produces a lot of stinkers. Peeples is a heartfelt movie about accepting people for who they are, and there are prominent themes of dishonesty and secrets; but this isn't a secret: [...]

Hide and Seek Release Date: January 28, 2005 Director: John Polson Stars: Robert De Niro, Dakota Fanning, Famke Janssen Runtime: 101 min Tagline: Come out come out whatever you are Plot: As a widower tries to piece together his life in the wake of his wife's suicide, his daughter finds solace -- at first -- [...]

Silver Linings Playbook Release Date: November 21, 2012 Director: David O. Russell Stars: Bradley Cooper, Jennifer Lawrence, Robert De Niro Runtime: 122 min Pat Solitano (Bradley Cooper) is a former history teacher who has been in a mental institution for the past eight months because he nearly killed the man who was having sex with [...]

A few big stars were born on this day: Robert De Niro (69 -- Ha!), and Sean Penn (52). Some of De Niro's best known films are Heat, Casino, Goodfellas or Taxi Driver (which I haven't, ashamedly, seen any of them, I own the first three but I just have to find the time), and he's pretty well known [...]