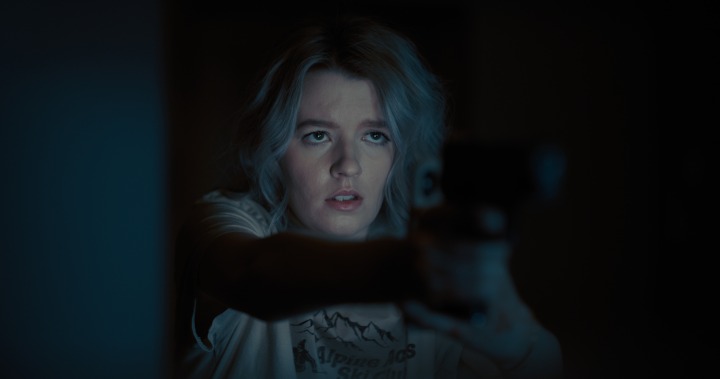 Featured image: Skyler Davenport as Sophie in See For Me. (Courtesy of Route 504 PR.)

From my early days of loving film, I’ve always loved the subgenre of home invasion, with films like Panic Room (which was probably the first I watched), I was hooked. Whether it’s horror or more pure thriller, it works for me. It’s a bit ironic as I hate being home alone, so my love of home invasion is probably what’s stirred that paranoia. There’s something about the structure of them that’s always familiar and great, so when films are able to add twists and turns and feel like it offers something fresh to the genre, I’m generally a big fan.

That’s very much the case with Randall Okita’s See For Me, a Canadian film that I was able to check out at last year’s Tribeca Film Festival (I was able to review it for The Movie Buff). I was equally a fan on my second watch, as there seems to be something exciting with each watch, from the showcase of the home and its intro, and especially the intro to Kim Coates near the end of the film. The actual film follows Sophie (Skyler Davenport in their first lead role), a former skier and Olympic hopeful who has lost her sight.

There’s options for her to be guided down the mountain by someone she trusts, but she is now spending much of her time housesitting or cat sitting. She gets a call to look over a mansion in the middle of nowhere, with the nearest neighbour at least miles away. It seems like a normal job; until three thieves break into the home in the middle of the night to rob its hidden safe. Of course, Sophie is unfamiliar with her surroundings, so she has to rely on the titular app, See For Me, where she connects with Kelly (Jessica Parker Kennedy), an army veteran who tells her surroundings, hoping to guide her out of this situation alive.

I was able to speak with the film’s director Randall Okita for the film, where we discussed the development of the film and the film’s writers (Adam Yorke, Tommy Gushue) and how they were inspired by a real-life app for the premise of the film. As well, we talked about how much the character of Sophie changed once Skyler Davenport was brought on to play the character; their favourite rooms to film in; fictional techniques and breaking into homes, and more in between.

You can find that interview directly below on YouTube, and also find the audio below. As well, if you’d like to watch my interview with Randall Okita and Skyler Davenport from Tribeca for The Movie Buff.

See For Me is now available to watch in theatres in the U.S., as well as available on On Demand platforms and on digital in Canada and the U.S.