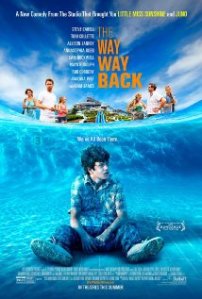 As I’m sure you’ve been able to tell; I love coming-of-age movies. Well, I love movies in general – but I find myself really enjoying movies like these. I think there’s something important about finding one’s place in the world; or even if it just means gaining confidence and growing as a person. The latest movie to the coming-of-age summer movie cannon is “The Way Way Back” helmed by Nat Faxon and Jim Rash.

Now, it may seem like I’ve seen Faxon through an unfair eye, mostly because I’ve said “who is surprisingly an Oscar winner” time and time again. Is it unfair that I was surprised to hear he has won an Oscar? I don’t think so. If one only looked at his on-screen filmography prior to this, he’s been in such mediocre hits as “Slackers,” “Club Dread,” “Beerfest,” “Bad Teacher” and “The Slammin’ Salmon.” Now, I don’t think any of those scream, or even whisper, Oscar contenders. He just doesn’t seem like he’d be pinned as an Oscar winner. (By the way, both he and Rash have won their Oscars for co-writing “The Descendants.”)

Both have definitely made a splash in the writing department, and this is no different. They’ve grown from being That One Guy Who Shows Up in the Broken Lizard Movies and the Dean on “Community,” to real above-average filmmakers that I love (but it’s not as if I didn’t like them before). I guess you could say, in my eyes, they’ve come of age in terms of their careers.

The story concerns Duncan (Liam James), a fourteen year-old boy who is dragged to a summer vacation spot with his mother (Toni Collette) and her over-bearing boyfriend Trent (Steve Carell). Duncan has a rough time fitting in, but he finds a friend in the manager, Owen (Sam Rockwell) of the Water Wizz water park.

Faxon and Rash design the film like experts. As soon as we’re introduced to the characters, they’re either instantly likeable, or you’ll just as instantly get a bad feeling about them. The only character one will get a sudden bad feeling about is Trent, portrayed by Carell. That’s his purpose. He’s the sort-of character that will be a total dick just because he can. When crappy situations happen, his mindset is to simply forget about them the next day. Carell plays the character well. Take Carell’s Burt Wonderstone and subtract the obnoxious way about him; replace it with the everyday soon-to-be stepfather, and you have the biggest dick in the movie, Trent. He plays a major role in stalling Duncan’s confidence.

Toni Collette’s Pam (Duncan’s mom) is usually likeable. Like most of the adults in the film, they take their kids along with them to this vacation spot. As one character puts it, “it’s Spring Break for adults.” This expresses the selfishness of many adults in the film (save the workers at Water Wizz, but more on that later). They’ll party and have a good time, but they won’t bother to include the children. That is very much the case with Allison Janney’s eccentric performance of Betty, mother of Susanna (AnnaSophia Robb), and Peter (River Alexander), where she constantly points out his horrible case of lazy eye. The actress is hard not to love, even when she’s criticizing a character. It’s the way some mothers do, and it’s downright hilarious for the audience.

Of course, there is Duncan. The hero of the film. He has a difficult time feeling he belongs. He’s awkward and shy, which it seems many can be at the age of fourteen. (Like I was.) But he grows as a person throughout the film and it’s a treat to watch. We get to see the good, the bad and the ugly of adolescence through his eyes, and just like the tagline states, “we’ve all been there.” The ugly is, of course, his stepfather. He’s also the bad. The good is Water Wizz water park and Susanna. (A potential love interest of Duncan’s, and she’s older, to boot!)

He meets Rockwell’s Owen, a person who teaches him that it’ll get better and makes him feel welcome. He offers him a job at Water Wizz, and he slowly gets Duncan out of his shell. Owen is the type of person that can make anyone feel welcome. He jokes about everything. He’s the type of person everybody knows. He could be your uncle (my Uncle Danny in my case), a father or a best friend. Sometimes his constant jokery gets in the way of personal interests (mainly Maya Rudolph’s character), but he’s the type of shoulder everybody needs at some point in their lives.

“The Way Way Back” might not pack the largest emotional punch. It didn’t make me cry, though I was close. Perhaps I wasn’t in the crying mood? Compared to the other coming-of-age movies so far this year, there’s more of a punch than “The Kings of Summer,” but less than “Mud.” More than a few scenes in the film pull at the heartstrings, and this is an uplifting and well-acted tale. It’s entertaining, hilarious and very enjoyable, if a little light-hearted at times.

Liam James may not be the strongest performer out of the bunch (who could be against Rockwell, Carell, Collette, Janney, Robb, Rob Corddry and Amanda Peet?!), but he has a timid charm about him. He shows promise, especially because his eyes are super expressive. I’ve always been attracted to Robb’s delicate kindness about her, and the characters she portrays. I want to see more of her.

Rash and Faxon show up in supporting turns as employees at the Water Wizz water park. Jim Rash plays a hilarious germaphobe named Lewis; Faxon is another employee named Roddy, master of the holding technique where he asks hot girls to wait to use the slide. These two truly understand what being a teen is like, because, like everyone else, they’ve been there. Faxon and Rash, and Stephen Chbosky (author, writer/director of “The Perks of Being a Wallflower”), may be their generation’s John Hughes. We’ll see in time.

One last thing. There is a concept of going your own way in this film. Characters are taught to not follow patterns and to choose their own path. There’s a point where characters (minor and major) are trying to pass each other in a water slide. Perhaps this is only boys will be boys tom-foolery. Maybe it’s about doing things differently, not following the norm, and making your own path. I’m not certain; it’s ambiguous and that’s the purpose. I am sure, though, that Faxon and Rash have penned a smart coming-of-age dramedy.