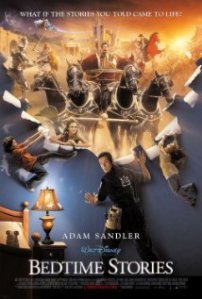 “Bedtime Stories” is imaginative and it’s one of Sandler’s more family-friendly efforts, but it’s lame, boring and forgettable.

“Mr. Deeds” is a watchable Adam Sandler movie. You root for Longfellow Deeds because he’s a small-town guy trying to adapt to the big city life, and he’s likeable enough to wish for his happiness. Ryder’s character at first is extremely unlikeable. Like most comedies (with hints of romance), it’s predictable – and you’ll see Ryder’s change of heart from 96 minutes away. There’s a few laugh-out-loud moments (“I think I just shat myself!”) and a lot of chuckles, so it’s an entertaining comedy that I find myself always watching when it’s on TV. John Turturro is amusing in his supporting role. But I assume it’s inferior to the original, but I can’t comment on that because I haven’t seen it. 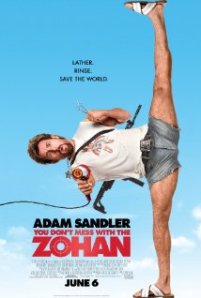 I watched this on TV the other week. I was half-paying attention and half on the computer, but even as part-background noise, it was still as awful as I remember it being at the theatre. The plot isn’t entirely stupid (An Israeli Special Forces Soldier fakes his death so he can re-emerge in New York City as a hair stylist), at least compared to some of Sandler’s other works, but the humour is stupid. I like politically incorrect humour – but all I ask is that it’s funny, like some of Sacha Baron Cohen’s work (mostly just “Borat”). Sacha Baron Cohen, Sandler is not. This is a middling effort, but at least there’s an effort to make his character memorable, since he isn’t distinctive in all of his average guy roles. It’s really too bad that it’s also one of his worst characters. John Turturro tries his best, but even he can’t make this enjoyable.

2 thoughts on “Triple review: ‘Bedtime Stories,’ ‘Mr. Deeds’ and ‘You Don’t Mess with the Zohan’”