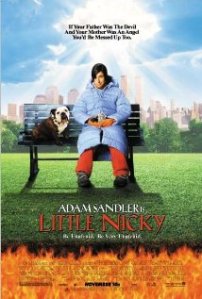 I’m not sure why I give Dennis Dugan a hard time as a director. It isn’t that he’s a poor director; it’s just that the movies he directs are usually brought down its poor writing. But Steven Brill is probably the worst director out of Adam Sandler’s crew.

Little Nicky’s (Adam Sandler) two evil brothers Adrian (Rhys Ifans) and Cassius (Tommy ‘Tiny’ Lister) have just escaped from Hell and are wreaking havoc on an unsuspecting earth. His dad (Harvey Keitel) is disintegrating and it’s up to Nicky to save him and all of a humanity by midnight before one of his brothers becomes the new Satan.

“Little Nicky” is sort-of a guilty pleasure. Yeah, the premise is far-fetched, but it’s a fun movie. It’s not the worst movie out there, but I know it certainly isn’t the best. One main flaw about the movie is the soundtrack. It just feels like it was made the night before development started, from Rock N’ Roll’s greatest hits.

The main character, Nicky, isn’t exactly the greatest guy out there. He’s the son of Satan. He’s oddly likable, if one could get past his facial oddities. Patricia Arquette a great actress who makes for one of Sandler’s finest on-screen counterparts. In any other Sandler movie, she would not work. But Valerie’s, Arquette’s character, oddities really match the odd personality Nicky possesses. Arquette is sweet and softly-spoken, so she brings Valerie to life well.

The movie’s hilarious at times but the sentimentality doesn’t ring true, really; and the writers attempt to force the sweetness too much. I like the fish-out-of-water humour, and some of the cameos are hysterical. Dana Carvey as a referee, Whitey, who was actually a character in “Eight Crazy Nights,” portrayed by Sandler. Peter Dante and Jonathan Loughran are funny as people who hail Satan.

Quentin Tarantino is awesome as a Deacon who one would see on the streets, the cuckoo guy preaching God’s word. Reese Witherspoon shows up for a bit as a sexy angel. A character from one of Sandler’s classics makes a cameo. And Jon Lovitz shows up as a pervert peering in on a sexy mother, and get sent to hell for it. Whenever he shows up, Kool & The Gang’s Ladies Night sounds, and it’s a great touch.

You’ll only find this movie funny if you enjoy Sandlers’ shtick. He talks in a funny speech impediment throughout. It will get laughs from his fans. His character is distinctive because of the speech impediment. The movie lets us know that Nicky got his speech impediment by being hit in the face by a shovel by his brother Cassius. (Speaking of Nicky’s brothers, Rhys Ifans puts in an amusing turn as Adrian.) Why doesn’t anyone just hit him with a shovel early on again? Maybe it’s like amnesia? Reverse effect, guys…

The movie is completely stupid, but it knows it. So that’s good. That’s funny. But it would be better if it just feels like “Little Nicky,” not “Popeye’s Chicken presents: Little Nicky.” The comedy also gets extra points for shoving pineapples up Hitler’s ass. Thanks for the laughs, Satan.