Here’s another episode of Filmcraziest Interviews and this one was a lot of fun with a lot of laughs. I was joined by some of the creative team behind a new short film called You Wouldn’t Understand which recently premiered at Screamfest L.A., and those who joined me include director and co-writer Trish Harnetiaux, actor and co-writer Jacob A. Ware, as well as actor and editor Anthony Arkin. 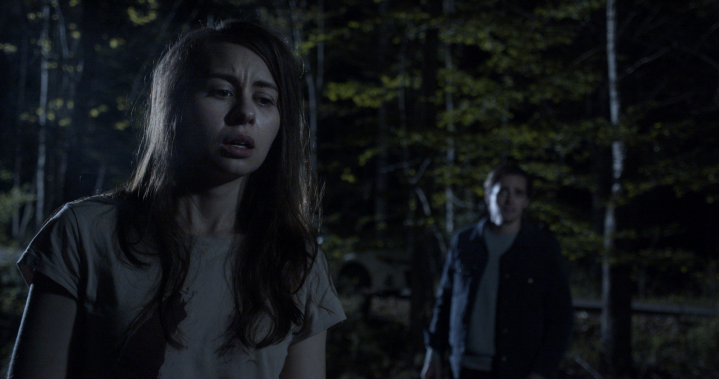 Welcome to another episode of Filmcraziest Interviews and for this episode I chatted with Terence Krey (writer, director and producer) and Christine Nyland (writer and star, pictured in the featured image) for their new film An Unquiet Grave, which had its World Premiere on Oct. 11 at the Nightstream virtual film festival. The film stars Jacob A. Ware as Jamie, a widow one year removed from the death of his wife. One night, he enlists the help of his sister-in-law Ava (Christine Nyland) to help him bring her back from the dead. It’s a two-actor chamber horror directed by Terence Krey, and written by Krey and Nyland.

A brilliant and fun nine minutes with strong humour, Trish Harnetiaux’ You Wouldn’t Understand follows a man (Anthony Arkin) whose idyllic picnic is upended by the arrival of a stranger, Angelic Guy (Jacob A. Ware). The dialogue’s sharp and funny and I love some of the humour, especially horse radish being called “horsey sauce.”

This is another tale in the “what would you do for your family?” horror cannon, which has seen some good features, even at this year’s Nightstream with Anything for Jackson and My Heart Can’t Beat Unless You Tell it To. Here, An Unquiet Grave is carried by two great performances by Jacob A. Ware and Christine Nyland, who also co-writes this film with director Terence Krey. And when I say the film's carried by these two performances, they're virtually the only ones in the film and are there in every scene. With that said, it's great that these performances are so compelling. Ware captures the grief of his character well, as does Nyland, and Nyland’s performance is the standout here as it’s unpredictable, and I would give kudos to a unique aspect of her performance but that would border on spoilers. But with what happens in the film and what results from the ritual is fascinating and creates such a cool dynamic, and makes for such an interesting concept.