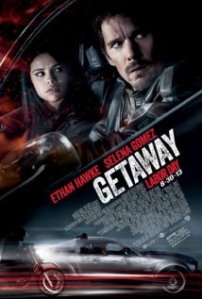 I like a good action movie as much as the next movie critic. But that’s the key word: good. A good action film, “Getaway” is not.

After former race car driver Brent Magna (Ethan Hawke) comes home to find his wife missing, he gets a phone call from a mysterious villain who informs him to go to a parking garage to retrieve a fast car.

From there, the Voice gives him random orders, to wreak havoc on the streets, so man on the other end would know he is willing to do just about anything to get his wife back. The orders are rather ludicrous, “smash into whatever you can,” “drive on the skating rink.” At one of the stops, a young girl attempts to steal the car, and she turns out to be the owner of it. She is portrayed by Selena Gomez, the film’s appeal for teenage girls. 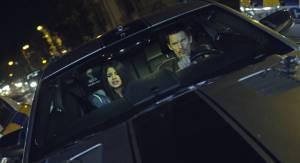 The Mysterious Villain’s motivation is, of course, personal gain, because, what else would it be? He states in his bad European accent that there is something at a bank and he “needs it.” Apparently, kidnapping someone and sending their loved one on a crazy mission to retrieve them is all the craze in Europe these days. This specific setting is a town called Sofia, Bulgaria; I think. The storytelling is kind enough to flash the name of the town two or three times, but that’s still not enough to make it memorable without research.

Ethan Hawke, as the former race-car driver, is sent on a set of missions; only about 40 per cent of which feel like they have purpose, or advance the story in any way. Many are random, only there to keep the action going. At least the “Fast and Furious” franchise has the courtesy to step out of the driver’s seat, throw around amusing banter between the characters, and have some character and plot development. Those movies are lots of fun, this one just steals from better films – and doesn’t try to put a spin on them. This just rarely stops for a single minute to try create a wholly coherent story, or have good character development. Selena Gomez plays a character who is billed as The Kid. She doesn’t even have a character’s name! Hawke’s character is likable enough for the viewer to care that he gets his wife back, because he’s an okay guy placed in a crappy situation; but every viewer already knows how it ends… So how does that make the film suspenseful?

Gomez and Hawke carry the film, but only with adequate performances; so that’s saying, they’re not particularly memorable. Nor is the film as a whole. Everything about this is lacklustre. Jon Voight literally phones in his performance as the villain, sporting a bad European accent. His character is The Voice.

That is compelling character development, right there. When an actioner is this generic and uninteresting, there is little fun to be had. Sure, it never stops. Sure, it’s never mind-numbingly boring, because something is always happening. But when the action is so repetitive, the experience isn’t compelling or notable.

When a movie can make me derisively laugh at its lame dialogue, I can’t take it seriously. There is a point where Brent is driving (as usual), and he’s saying something along the lines of, “I want to see my wife!” And the villain asks, “You want to see your wife again, right? Then do what I say!” Naw, man, that’s not why he just said “Let me see my wife” about three times in a row. (This is a scene from the movie, but I know I didn’t get it word for word. I’ll have to start bringing a notepad to screenings.)

If you are an audience member who is attending this film for a pulse-pounding, full-throttle, pedal to the metal, non-stop actioner, you shouldn’t be disappointed. But, with unoriginal fast-paced actioners like this; I like it to be fun, and not just the conventional mess this turns out to be. It’s a 90-minute chase movie, where cops chase Magna, Selena Gomez whines and begs to be let go, more cops chase Magna, cops crash because Magna’s just too fast and he has mad skills. The filmmakers put that on a loop, and pray audience members aren’t intelligent enough to notice. This time, they couldn’t getaway with it. 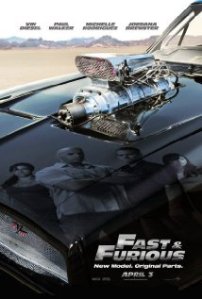 Brian O’Conner, now working for the FBI in LA, teams up with Dominic Toretto to bring down a heroin importer by infiltrating his operation.

This tries hard to be intelligent, and it works to a certain extent. This is better than the first two sequels. I certainly don’t groan at this as much as I do with 2 Fast 2 Furious. It really shows that bringing the main cast back together returns the franchise to a fine form. This time around, Paul Walker is tolerable. Justin Lin is a really good director for this type of movie. The racing scenes are fun, and it’s an adequate revenge story. The filmmakers try to hard to give us a great one here, and they don’t quite succeed with that, this isn’t a bad movie by any means. The title is really the only lazy thing about the movie. For an action movie with lots of racing, there’s a lack of non-stop kinetic energy. The ending really does set up something special for the next movie.