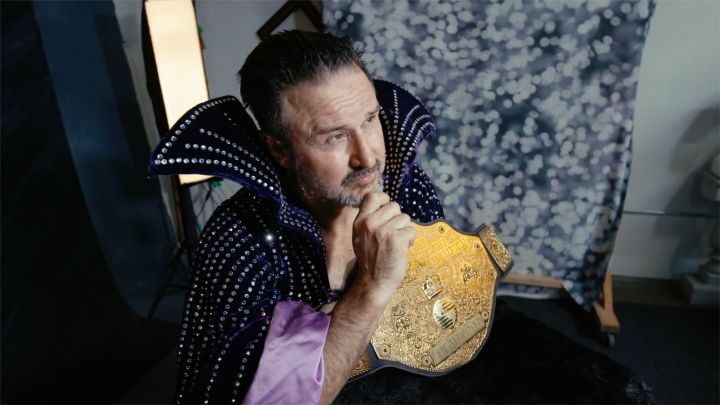 In 2000, David Arquette won the World Heavyweight Championship as a promotional stunt for his film Ready to Rumble. The documentary You Cannot Kill David Arquette depicts his return to the ring on the independent wrestling circuit.

He’s been made to feel like a joke and even when he’s starting to get back into wrestling and he’s excited about it, his daughter Coco sees his goofy costume and says, “Dad, you’re a wizard!” and it’s crushing watching him immediately become self-conscious. This isn’t meant to be a villainous moment for the daughter, as it’s heartwarming later in the film watching her react to her father wrestle, but it’s a great transition into David saying he’s tired of being a joke in Hollywood and the media, and he’s a joke in wrestling, too.

It’s hard enough finding your place in the world but it must feel completely awful to be belittled by an entire community because he comes in for a promo stunt and wins a fight. “I gotta do it, you don’t know how they treat me,” David tells his wife Christina McLarty Arquette when she says it sounds like a dream instead of reality to return to wrestling. It’s totally heartbreaking that he feels like an outsider, and he’s not accepted because there’s so much resentment from (most) fans as he’s perceived as this Hollywood goofball who wins the title with no training and no respect for the sport. We learn that he loves the sport and doesn’t deserve the hate; he was just written as the winner in that fight.

And that’s what that wrestling is: written. Wrestling’s a choreographed sport with pre-determined results. Arquette says about the sport of wrestling: “It’s a sport… It’s just a theatrical sport. It’s like a play on steroids.” And he’s right, and one of the most enjoyable scenes for me is when he and RJ City go through their fight choreography together, like trying to remember their actions after reading a script, and that’s edited in with the fight itself. It’s cool to hear about the planning, and it kind-of makes you realize how much more goes into it.

This film is great because you don’t have to know anything about Arquette or have watched his film Ready to Rumble to watch this film. As well as this film being a great portrait of him, it’s great learning about the world of independent wrestling and how he immerses himself into that. This film comes at an opportune time, too, with two films from last year depicting the world of independent wrestling, with Fighting with My Family (which depicts a company in the U.K. for some of the film) and especially The Peanut Butter Falcon which depicted some backyard wrestling in a small town.

There’s some of that here, and it’s cool learning about that world outside of the WWE. The film’s at its finest, though, when we see David travel to Mexico to train and he trains with some Mexican wrestlers. We learn about Mexican street wrestling, where a pair fight in front of four lanes of traffic when the cars are stopped at a traffic light. It’s cool seeing that wrestling is everywhere as a doc made for Arquette fans and wrestling fans, but the story feels so universal because Arquette’s story is relatable with his anxiety and self-doubt.

A scene in Mexico is so great when he gets into a match because he gets cheered on when he wrestles. Before his comeback, he’s generally met with boos. It’s bittersweet that he has to go to Mexico, a place where no one knows he’s “disrespected the sport”, in order to gain acceptance, but that acceptance from fellow wrestlers and fans is awesome.

It’s a joy watching Arquette’s return to the ring and his redemption as he goes through that journey. There’s passion in this quest and passion in the filmmaking (by David Darg and Price James) and it’s always great learning something new about someone you’ve watched on the screen for years.