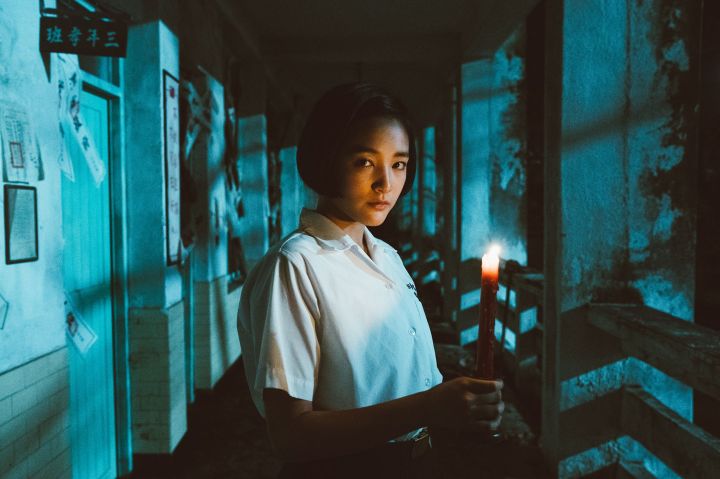 Detention is set during the White Terror in Taiwan in 1962 during a time of martial law where freedom was not known and free thoughts were oppressed. However, going against the government’s wishes, some students at Greenwood High School are part of a secret book club reading banned books. Fang Ray-Shin (Gingle Wang) is at the centre of this group and one night, after lessons, Fang wakes up in a classroom and finds the school entirely changed. Also there is fellow student and book club member Wei Chong-Ting (Jing Hua-Tseng) and together they must find a way out of this nightmare.

Just about everything in Detention is surreal, but that’s expected as it’s based on a survival horror video game. The atmosphere in the film is creepy as it plays out like Silent Hill. What’s surprising is the emotional hook of the film and how well these characters are written. This is especially the case for Fang, a shy girl with a terrible home life who’s portrayed well by Gingle Wang. It’s interesting watch this mystery unfold and learning what led to this surreal world, and it’s interesting learning about Fang in these dramatic moments, especially in her relationship with Professor Zhang (Meng Po-Fu).

Co-writer/director John Hsu gives all this information in a coherent way in between scenes in the nightmare world as the mystery unfolds. The horror’s the most interesting part to me but I like how the political ideas are weaved into this, especially with a large beast carrying a lantern that hunts Fang and Wei. This beast, while being scary, also recites the government’s warning: “Everyone is responsible for reporting espionage, to conceal it is also a crime. For subverting the government, the sentence is death.”

There’s a frightening intro to this creature as Wei and Fang have been chased into a closet by a teacher in one of the strongest sequences visually, and Wei sees this creature’s arm and sees what it can do to people. Just hearing it move is creepy, as the sound design is so strong. The creature design is cool, too, though he’s not as scary as I’d want him to be. I think the FX let’s the creature down in that aspect.

Whenever there are FX shots, the cinematography looks more grey and something about the picture doesn’t look like it’s blended in with everything. It’s not a huge deal as there are only some scenes that demand heavy visual effects, and the horror of these moments are still convincing. It just doesn’t look perfect. The chemistry between Wei and Fang is strong, though, as they try to navigate this situation and the first bit of tension when they learn they are really trapped in the school is when they go out into the yard and approach the road, but see that instead of a road it’s a rushing river. The visuals in this film are great, especially when Fang first sees a tableau in an auditorium of someone hanging from the rafters and a chair toppled over.

Detention gave me vibes of the film The Book Thief mixed with classic Asian horror (a girl with bangs dripping blood who appears throughout is a haunting visual), in a film that’s as much drama and history as it is horror. Setting it during the White Terror in that time of oppression is smart, and that book club arc drives the entire story. I like horror blended with history when there’s a strong balance and Hsu does find that balance, though I generally enjoyed the scenes most inside the Nightmare. Mind you, one of the best scenes is a dramatic moment at the end of the film. I won’t spoil it but it’s damn lovely and the last 10 minutes are great, as the whole film is about personal reflection and it’s memorable how that all comes together.