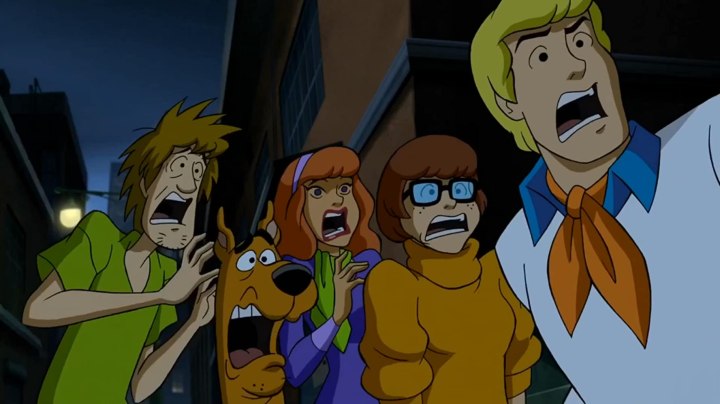 I’m sitting here eating some of those Betty Crocker’s fruit flavored Scooby Snacks (not a sponsor). I’m 25 yet still have the snack preferences of an elementary school child, but that’s beside the point. I decided it would be an appropriate time to review Scooby-Doo: Return to Zombie Island. A direct sequel to the 1998 film Scooby-Doo on Zombie Island, this has the Mystery Gang coming out of retirement to investigate a mystery on the familiar zombie-infested island.

That’s my first problem with the film, the fact that they’ve “retired.” It opens with a montage of our gang chasing a bunch of villains as if in a last hurrah and then it’s revealed Fred has sold the Mystery Machine (for some reason). I haven’t been following the current television shows for Scooby-Doo so I don’t know if it’s canon that Mystery Inc. has closed up shop, but in this film, it comes out of nowhere with zero explanation. Scooby (Frank Welker) and Shaggy (Matthew Lillard) make Fred (also Welker), Daphne (Grey Griffin) and Velma (Kate Micucci) promise not to solve any mysteries for the foreseeable future because they’ve like, had it, man! Enough of that spooky stuff, they just want to watch horror movies where the monsters are fake.

When they win a trip to Zombie Island from an Elvira marathon show, we realize that most of the group don’t know how to live without sleuthing. Shaggy and Scooby will always have their food (and by the way, all the food in this film still looks delicious), but Velma only has her sleuthing. It’s also annoying when Shaggy and Scooby are attacked by zombies and they all think there’s a rational explanation for it because they can’t investigate the mystery. It’s convoluted and irritating, but the film becomes okay when Shaggy and Scooby release them from their promise and let them investigate the strange happenings and why they were invited to the island.

Then, we realize why they had the whole convoluted thing about them not being able to investigate the mystery – because there’s not enough story in this film and there’s not much of a mystery. They literally have to kill about 35 minutes here so they can get it to feature length. If they were allowed to investigate from the get go, Velma would have solved this “unsolved mystery” (as she calls it on her blog) in about 10 minutes.

A note about the voice cast: I like the cast and how it’s adapted over the years, like now that Frank Welker is voicing Scooby as well as Fred. Matthew Lillard voicing Shaggy in animated projects since 2010 is a stroke of brilliance because he really embodied Shaggy in the live-action films (Scooby-Doo and Scooby-Doo: Monsters Unleashed). Of course, I also like Grey Griffin as Daphne, as she’s voiced her in feature films since my personal favourite Scooby film, Scooby-Doo and the Cyber Chase. My only complaint is Kate Micucci. I like her as an actress, and though she’s voiced the character since 2015, I’m still getting used to her. Her voice fits the character, but her voice is just so distinct I still hear too much Micucci and not just Velma.

Anyway, Return to Zombie Island still does have a couple clever moments. The classic Scooby chase scene where they go from room to room will always be funny. The film’s also clever in a character name that would be a spoiler, but that is with Alan, played by John Michael Higgins (and this casting is solid). I think the best joke is when Fred is recapping the first film and Shaggy is just shouting, “We know, man, we were there!” It’s helpful exposition for those who might forget the first film, and it’s a good meta joke, but even recapping it so blandly takes away some of the joy of the first film.

The original is one of my favourite Scooby movies and I love these movies, and this one is just rough to watch and feels lifeless. By the end of it I didn’t care to hear anyone call our gang meddling kids because the story isn’t interesting. Its biggest problem is just breaking that sacred formula of investigating a mystery and getting called meddling kids, as the random introduction of them retiring just takes away my enjoyment. The formula’s still there, it’s just buried under a lot of Scooby Snacks.