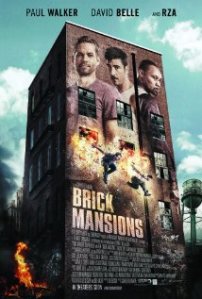 If you see Brick Mansions, remove logic from your list of expectations. You might be giving this film a chance for its action. Hopefully the poster doesn’t convince you to see this, because it’s kind-of awful. Instead of putting the poster on a side of a building, the poster is literally a picture of the three actors on a side of a f!#king building! That’s insanity!

You might also be giving this a chance to watch Paul Walker in his final, fully completed film. He’s adequate in his role – silly at times, particularly when he’s warring with co-star David Belle over who gets to take a stolen van; or when he’s unconvincingly saying “Back off. Back off.” The writing is partly to blame, too. He’s getting stronger as an actor, being tolerable and convincing as his character – and only poor once or twice in a film. It’s a shame that we won’t ever be able to see him be truly and consistently great. He does take to the stunt-work of parkour like a champ and his training shines through, in what is easily his most physically demanding role to date. This film surely does not do for parkour what The Raid: Redemption did for the Indonesian martial arts style of pencak silat. That’s a blurb that would probably suit the original District B13, upon which this, an American remake, is based. Now that the Raid is being mentioned, this is sort-of like a dumb version of it, just with a lot less blood because its PG-13 rating holds it back.

Anyway, David Belle’s involvement helps the action film, because he’s considered the founding father of parkour, an instinctive acrobatic style where you can jump off of any surface or object. It’s also really helpful for being untouchable and kicking someone’s ass in a fight. It’s awesome to watch these guys jump around like grasshoppers over people, from building to building and wall to wall. The action is just great, if repetitive – but this is where this film succeeds the most. The first scene where David Belle is prominently featured is a phenomenal action sequence. First-time director Camille Delamarre directs the action well, but he uses slow motion to a fault. The over-utilization of it somehow gives the film a sort-of visual flair in the likes of Gareth Evans’ style, director of The Raid and The Raid 2. Delamarre isn’t nearly as successful directing the dialogue exchanges, because it’s all a bit silly – but that is screenwriter Luc Besson’s fault.

The silliness is found in lack of logic and in the dialogue of the villainous Tremaine (RZA). He says things like “Tremaine ain’t anxious, he causes anxious,” and “C’est la vie!” which shows us that this connoisseur knows French. (It means “That’s life” in French, by the way.) His motivations don’t seem clear, and he’s generic – but he explains at one point that he’s a “politician,” but it must be assumed that he’s speaking of being a politics of all things drugs. He takes a nuclear bomb that can blow up a whole town, if it’s 5 miles in diameter. RZA seems to be a good artist and great composer (most notably for Kill Bill Volume 1), but based on his work in this film, his acting ability is lacking; but he can’t be the greatest actor in a role like this.

He’s usally silly, never intimidating and over-the-top with his violence; like shooting someone because they don’t have any good ideas, or shooting a television when his henchmen are playing a video game, because why the hell not, right? It seems to me that the writers try to write him mildly intelligent dialogue, but it’s so damn stupid. The attempt to make him seem like a smart, complex mastermind fails miserably. They make the guy all fancy; he’s always cooking, and the set design for his office gives him a nice red table and expensive chairs under a red light. He looks like criminal royalty. It’s a character who wouldn’t work for anyone, let alone RZA, who’s never quite believable. Remember him trying to convincingly portray a blind kung fu master in G.I. Joe: Retaliation? Oh dear, I won’t even go started on that.

Paul Walker’s character of Damien, an undercover cop, has a bone to pick with him because his father was killed in a drug raid. That’s his motivation to take the baddie down when the Mayor asks him to go in to the rundown Brick Mansions to disarm the nuclear weapon. Brick Mansions is a walled-off section of 2018 Detroit (a fictional present day Detroit would work to the same effect because four years is not a jarring difference in time) that was designed to keep the rampant crime of Detroit in one small area. Hospitals, police stations and schools are shut down in this sector of Detroit. Damien teams up with Lino, the same character (named Leito) David Belle portrayed in the original French film called District B13 upon which this is based. He’s okay, and it’s a fine role for him to be introduced to the North American public. He does give off an impression that he’s trying hard to hide his accent – which is distracting. He does a better American accent than Gerard Butler, but I’m curious as to why everyone knows the character is French. He sounds pretty American to me. It’s just a little funny.

Lino and Damien are the only characters you’ll care about because they have clear motivations that, while generic, are mildly well-written. One character you won’t care about is one called Rayzah (awful f@!king name) who is largely the sex appeal of the film. Her distinct, over-the-top attraction to Lino’s ex-girlfriend Lola (Catalina Denis) makes the film have an out-of-place perversion about it. The poor writing of the film is its biggest flaw; it’s usually unintentionally hilarious. At least, most of it until a very bothersome finale.

The logic is just not sound, maybe because of seriously stupid henchmen. Even though one henchman says that Damien and Lino’s life is worth more than any of theirs, all of the henchmen do not shy away from aiming to kill them anyway! How does that make sense? There’s another occasion which I won’t spoil, but this scene, like the other mentioned one, all happens for the sake of guns being shot.

It might sound like I’m giving this film a hard time. This is not something I hate, because it’s not well-written by Luc Besson; but damn, it’s entertaining. Even when the action isn’t happening, you might be laughing your ass off because the dialogue is so dang silly. If you can get past the silliness of it all, this is a fun time at the movies – and it’ll make a great rental for a dumb movie that you just want to pop in the Blu-Ray player and sit back and have a drink and a lot of laughs with your buddies. (If you can’t get past silliness in a film, just avoid this like the plague.) This is hilarious in the most unintentional ways, and will make a great dumb-movie double feature with 3 Days to Kill. I’m not sure if Dumb Easy Watching was Luc Besson’s intention but eh, “C’est la vie!”