Each year in cinema, trends pop up. May they be post-apocalyptic films, last year’s McConaissance, and Young Adult adaptations that just aren’t going away – sometimes these trends are here to stay. One trend of 2014 is religious and faith-based films. This year has seen the release of Son of God and the controversial Noah. The latest faith-based film is called Heaven is for Real.

It’s a film set in the town of Imperial, Nebraska; based on an event that occurred back in 2004. A four-year-old boy (Connor Corum) has a near-death experience and claims to have seen Heaven. His parents Todd (Greg Kinnear) and Sonja (Kelly Reilly, Flight) don’t know how to interpret it. They don’t want their kid to become a laughing stock or just a piece of controversy. He soon does find the courage to share his son’s life-changing experience with his parish and then the world six years later, when he wrote a novel about it.

This does seem like a life-changing experience; seeing Heaven could give someone a whole new perspective on life. The concept of Heaven being a concrete fact could frighten some people. I find that hard to understand because it’s an idea that gives me great comfort. They could be afraid to know if their loved ones are or are not in Heaven. Some people believe they see Heaven in the little things on Earth. Some of these ideas are portrayed through Margo Martindale’s character. One aspect of the film isn’t handled with the most realism. I could understand why non-religious people might be maddened by the controversy, but why do the religious folks of this town seem to be so disturbed by it? It’s not like he had a near-death experience and visited Hell instead, and spoke of Hitler being flogged.

I understand where Colton’s parents are coming from, because no one wants to see their kid be ridiculed or seen as vastly different. Colton goes from being an ordinary kid to a sorta ordinary kid with an incredible story. Conveniently, Colton isn’t in pre-school yet, so it’s his parents and older sister who receive the tame backlash of the people who bother to say something. Kinnear’s good in a few scenes and just adequate in others. He’s believable as a father figure and a pastor. I think Reilly is particularly great in two scenes and good the rest of the time. I felt their pain when they thought their son was going to die – it seems like a horrifying experience. Parents will really feel their pain. 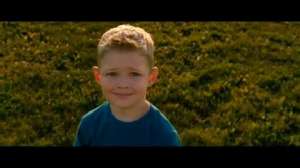 Connor Corum is convincing in the way that we could believe he sees Heaven. Another notable aspect is his facial expressions during a rendition of “We Will Rock You,” which border on funny and downright creepy. Otherwise, his performance as Colton is quite distracting. After he halfheartedly delivers his line, he just vacantly looks at his scene partner. When he’s watching his father on stage at Church, he’s vacant with a “I want to be somewhere else” look on his face – the way I looked when I was a kid going to Church. He’s realistic in the way that he’s a kid and he just wants to play– but it’s going to take people out of the movie. Can’t Pierce Gagnon (Looper) portray every kid under the age of 10? Corum is surely cast for his cuteness and resemblance to the real-life Colton Burpo. By the way, you can tell Burpo isn’t a fictional last name because no one can make that shit up. No one’s that cruel! If that was a fictional last name, that would be more humour to accompany the flairs of lite comedy found throughout.

Your enjoyment of the film might depend on your personal faith and tolerance for films with no antagonists. The conflicts are largely man vs. self; people wrestling with their beliefs of this situation. There’s not one antagonist. The sometimes slack narrative could have benefited from one or two. I’m surprised this film is able to milk 99 minutes out of this material. The first twenty minutes is practically all filler. The father is a pastor who works a lot of jobs to make a living and improve his small church in any way he can. The film actually gets into the plot when Colton is rushed to the emergency room after a ruptured appendix that started on the way home from a trip in Denver.

Without this filler the film would be quite short. Even at its length now, it feels slow, with only self-conflicts to keep the film going. Two sub-plots arise that don’t get consistent focus or a conclusion. They might have helped advance the story a bit. You cannot fault the film for staying focused on the story at-hand. One of the sub-plots is money troubles, where solutions are offered but then the sub-plot is dropped completely.

Heaven is for Real does prove that films can still be mildly successful with no major antagonists. If screenwriters Randall Wallace and Chris Parker offered an adaptation with a few fictional antagonists, perhaps the narrative would be more compelling. We see so many films that take minor detours from true stories, so what would have been the harm in one more? God forbid the Burpo vision becomes tainted!

All in all, this is a lovely little drama with a lot of meaning. It could have a more engaging story with some more substance, other than strictly thematic substance. Hey, at least the Nebraska settings make the film look nice. Granted, some people still are not going to believe the story at hand. Since so many sub-plots go unsolved, this still might have the same effect if some opinionated person just stood up and said before the end credits, “I still call bullshit on all of this.” Now, putting that in a Hollywood film would be brave and courageous.