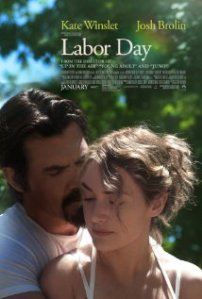 Warning: If you don’t want to know a lot about the film before seeing this, there might be more minor spoilers in this review than my usual review. But I guess there’s always that spoiler risk when reading a review. Anyway, enjoy!

Jason Reitman’s newest film “Labor Day” is set in 1987 in a town with a lot of nice landscapes. It follows Adele (Kate Winslet), a depressed single mother who has been divorced for a few years now. She’s both depressed about the divorce and about the fact that she feels as if she has lost love forever. Her depression has gotten so bad that she only goes out of the house for a monthly trip to Price Mart. Her son Henry (Gattlin Griffith) is starting 7th grade on Tuesday and he needs a new shirt, and they might as well do their supplies run. It doesn’t go as planned when Henry runs into a wounded man (Frank, portrayed by Josh Brolin) who menacingly yet not-so menacingly demands a ride to their house. He ends up being an escaped convict – ruh roh! As police search the town for him, he takes refuge in their home and the mother and son learn his story while their options become increasingly limited.

There’s tons of drama and some suspense sprinkled on each day in an attempt to keep everyone interested. The suspense is practically just a lot of people visiting (especially for someone who’s practically a recluse!) in a town where the people can be perceived as helpful or really freaking nosy. Some of them don’t even knock before they come in. That’s inconvenient for someone who has a fugitive in their home. Since the suspense is so simplistic, and the story is so simplistic and predictable (for the first two-thirds, at least), it only rarely increases the heart’s bpm. To add to the drama and the attempted suspense, this is a cheesy romantic flick, extra cheese.

The depressed Adele sees Frank as a chance to love again. You know, because it’s statistically proven that Stockholm’s syndrome is nicest on labour day. Those leaves are just so dang romantic! And don’t get me started on the peaches! Oh the peaches! A kind neighbor (J.K. Simmons) brings by a whole basket of peaches and they can’t eat them all! They’re only three people; so what do they do? They bake a peach pie! The way Jason Reitman directs the scene with Brolin directing Winslet’s shaking hands running through the peaches is horribly reminiscent of that pottery scene in 1990’s “Ghost.” When it’s with pottery it’s okay, but when you’re guiding someone’s hand mixing peaches up, it’s getting silly. It’s not as awful as the scene where Brolin feeds Winslet some beans, though. Winslet has to be fed because she is tied up, because Brolin is still a big bad kidnapper.

Brolin portrays a relatively kind character, for someone who was convicted for murder. We see his crime through flashbacks that are randomly shown throughout the film; it’s not as if it’s shown and then right after he’s waking up from a nightmare, and it’s not like he’s sitting down Adele and Henry and telling them what happened.

Frank teaches Henry how to do things that a father figure teaches their son. It’s nice that Frank tries to be a father figure, but it’s just a weird situation with so much attempted sweetness shoe-horned in here. Personally, I see Frank as one of those stepfather figures I’d want the hell out of my house.

I’ve bagged on this film a lot so far, so here are some things I liked about this. I enjoyed this one incredibly random character named Evelyn (I had to look that up because I don’t think they actually say her name in the movie) looked her up; she befriends Henry, and she’s just comic relief on random days. Tobey Maguire’s narration is also good; I think he has a good, calming narrative voice. Another good thing about the film are the performances; I think the actors are talented, but just acting in a different, but very strange film where the basic emotions are anxiety and depression in the beginning, and things get more inspiring and sensitive as it goes along. It’s always welcome to have these bursts of enjoyment in a slow-moving, bland snoozefest.

You might like it, but since I am not all that familiar with Reitman’s style, I could have easily confused this for a Nicholas Sparks adaptation. Yep, it’s one of those. Since we know love is such a sweet thing, there’s not much use for a flick like this. There are a few things I took from the film, though: 1) If you go to Price Mart often enough, you’ll pick up someone who’s a pretty good handymad; and 2) You learn a tip if you ever harbour a fugitive: You should keep him inside and not play sports with him in the backyard or do chores in the front yard; because it defeats the meaning of hiding someone.