“Lone Survivor” is a war film that truly expresses how far one will go to survive in a life-threatening situation. It’s like that example commonly used where if a parent sees their child in danger, their protective instincts are going to take over, and if the act requires extraordinary strength, they’ll probably get the necessary adrenaline rush to do so. Sometimes the adrenaline rush doesn’t always help, but it helps give people hope for that situation. This film depicts the courage and survival instincts of the men of Operation Red Wing, a US Marines operation to capture and kill a notorious al Qaeda leader Ahmad Shahd, who had killed twenty U.S. marines weeks prior. The operation takes place in June 2005 in Afghanistan.

The group of marines who take part in the operation are Marcus Luttrell (Mark Wahlberg), Lieutenant Michael Murphy (Taylor Kitsch), Matt ‘Axe’ Axelson (Ben Foster) and Danny Dietz (Emile Hirsch) who go at it alone in stage one in the operation, to recon the area where Shahd is suspected of staying. Their knowledge is that the village has a small group of ten men, but what is really in the Taliban village is a small army. That isn’t the only thing to go wrong on the mission primarily, their position is surrendered when a group of goat herders stumble upon them. The moral dilemma of whether or not to kill them (two are kids) puts them a situation that will put all of their lives at stake.

It’s curious that it’s such a moral dilemma for them, whether or not to kill the two kids and old man who stumble upon them. The Marines didn’t want to commit a war crime, but it sparks a heated debate within the four men about what they should do about the situation. But they are Taliban, and the younger men are trained soldiers practically. One of them is a kid, but one seriously hard-looking one looks about 21 years old, no younger than one Petty officer on the operation. Anyway, at least these soldiers do have morals. I guess they wouldn’t clear their military psychology test if they were unstable in that way.

They do have to do what’s right for their country, and patriotism is a main theme of the film. It’s a rousing film about men fighting for their country, and that’s why I like war films; and the action make them pretty great, too, of course. It’s cool when they have attempts at humour, as well. This film has a few of them, notably during a scene where it shows how Petty officers gains respect from their higher authorities in the Marine corps. There’s a speech that is given by Alexander Ludwig (portraying Shane Patton, he’s a bit better than he was in “The Hunger Games”) where he tells them why he’s going to be a good Navy SEAL diver. Some of it’s good, some of it’s odd. I like the performances by the main four soldiers on this mission.

They’re all talented actors, really. Kitsch’s character is a big shot because he is a lietuenant; he’s good in my book because he likes “Anchorman”, too. Hirsch is particularly good in one scene, and generally good. I really like Ben Foster as an actor, and he might have one of the best lines in the film as far as I’m concerned. Mark Wahlberg just keeps getting better and better, too; I don’t mean to bore you readers with somewhat generic comments on main performances, but I like to give credit where it’s due. The courage these men they are portraying is so admirable, because they just keep fighting. I’m sure that’s why these talented actors were attracted to the roles. 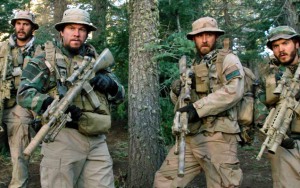 That’s probably why so many were attracted to see the film. There’s a lot to like about it, but there’s also some stuff wrong with it. I’d have appreciated a different title so it would allow more suspense to take place. It’s still an effective and emotionally impactful film, regardless. It could have been called “Military Communication Devices Suck,” because they couldn’t call in their position to the base half the time, or even “Operation Red Wing” could have been an effective title.

Anyway, Peter Berg directs the film well, but I don’t like some of his creative choices. He uses slow motion way too much for my liking. He’s unrelenting with it, really. Some scenes are improved with it, for example when the soldiers fall down hills, he uses slo-mo at the beginning of it so it’s an interesting shot. Its effectiveness is hit and miss. There’s an archive footage sequence during the opening credits depicting cadets training to be a marine; it’s cool, but it’s not clear if it’s footage of the soldiers participating in the operation depicted of the film. There’s also a funny thing about this film; some films might start with a scene taken from the middle, but this one starts with a scene taken from part of the end! It’s a silly decision because this surrenders some suspense from the film, as well, but the third act is still stellar.

One more creative decision I wasn’t fond of: During a scene shared between Luttrell (Wahlberg) and Axelson (Foster), Axelson is asking Luttrell for a favour that is quite touching and one of my favourite parts of the film, and just before I can decide “Hey, is this worth a tear?” Berg interrupts it with a loud explosion! Come on, man! For action fans they might appreciate that the drama gets cut short, but it’s so sloppy to me because it was a great scene. It does depict the harsh reality of war and the suddenness of such violence, and how quickly these soldiers have to react to enemy fire. It’s realistic, but sloppy.

There are some surprises with the film, especially how gritty it is. The blood and battle wounds that cover these soldiers is really just heartbreaking. Even though this film is flawed, I think it deserves a re-watch for the great action sequences. One more thing: The sound effects of this war film are truly spectacular, there are explosions and gunfire going off every which way – and it feels like you’re really in the film with the soldiers.