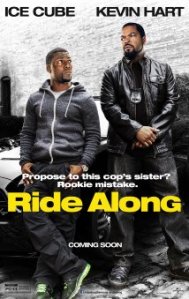 Buddy comedies remain one of the most dime-a-dozen, yet bankable, sub-genres of comedy and action. Last year, Paul Fieg made an attempt at re-inventing the genre by simply replacing men as the focal point, with women (Sandra Bullock and Melissa McCarthy were the unlikely duo) appearing in “The Heat.” The buddy cop action comedy is a formula that’s never going to change, but we can always hope for a film to try to mix things up and still give us a good time.

The newest buddy cop comedy “Ride Along” stars Kevin Hart and Ice Cube. Ben (Kevin Hart) is a fast-talking security guard who has just been accepted to the police academy. This film is really about him proving himself that he could be a good police officer, as well as prove to his girlfriend’s (Tika Sumpter) brother James (Ice Cube) that he’s man enough to marry his sister. And how does he prove that he’s man enough? Well, James can take him on a ride along, of course! Isn’t that the only way? And he proves to people watching the film that he’s man enough by nicknaming his penis the black hammer (and that’s his gamer tag, too!)

It’s funny to me that this ride along can prove that Ben is man enough to marry the sister and be a police officer, while it’s simply an excuse for James to humiliate him and prove that he can’t do either. Meanwhile, James really wants to take down this feared Atlanta criminal named Omar; he’s a ghost because he’s never been seen. One knows when that’s the case with a big-time villain, the reveal is either going to be someone we’ve already seen on screen, or a random big-name actor. I won’t reveal which one it is here, don’t worry. James has been chasing this Omar character for three years, which is ruffling his lieutenant’s feathers. It feels uninspired and a simple excuse to make this film look like it has a plot; but it is the sub-plot that enables action to happen.

If this sub-plot wasn’t existent, the film would simply be a comedic version of “Training Day.” Regardless, this is still a comedic version of “TD” – the filmmakers put in that silly sub-plot in to make it less obvious. They will help some people make the connection to it by saying that film’s title, so at least they’re honest about the fact that we’ve seen this story before. The film isn’t as bad as I might be making it out to be in these first paragraphs; I just wanted to get the flaws out of the way. The action scenes are amusing because they’re able to add comedy to the action mix of it all. That can be difficult, filmmakers try and try to do that – but it’s usually a miss. It hits here, once or twice. So director Tim Story (“Fantastic Four”) should get some recognition for it.

The film is usually entertaining because of the consistent laughs. The film is as familiar and unoriginal as they come, but I think you’ll find yourself laughing a lot, but maybe a bit less if you’ve seen the trailer beforehand – I managed to not see the trailer once. The multiple laugh-out-loud moments are the most enjoyable parts of the film. Well, really the only enjoyable parts – the action is straight-forward and there are explosions; so that might make this a fun flick for people who like loud noises. There’s an amusing aspect in one of the action scenes, but I won’t spoil it because now that I saw the trailer after watching this, I won’t spoil a funny scene that wasn’t in the trailer.

This feels like an advertisement for XBOX Live at times, but whatever; video games are cool, too. It seems Hart’s character is inspired by video games to become a cop, but with his knowledge of the sounds of weapons developed by playing realistic video games, he might just be better off as a weapons specialist. Or he might just be better off continuing playing video games with his buddy Assface. That’s a funny name, but the filmmakers are making it too easy for people to criticize it and say that they (the writers) are trying too hard for a laugh every time the name is said. At least the film is funny, but this is one of those comedies where only one character gets the laughs. That character is Ben, and Hart’s energy helps the film not be a trainwreck. Anyway, he makes it enjoyable for the audience members, while Ice Cube is simply the straight man. He isn’t able to have much fun in his role, unless you consider screwing with Ben’s character a fun activity. Cube’s stern facial expressions and his pissed-off comic delivery works with some characters (like his angry police captain in “21 Jump Street”) but it doesn’t work here.

The main reason why James hates Ben so much is because Ben accidentally set him on fire at a barbeque one time. That’s one reason to hold a grudge, I guess. Some might just want to say to him; man, you got burnt, get over it and just be thankful it didn’t leave any ugly scars on your face. Since James hates Ben for a fair majority of the film, the chemistry isn’t enjoyable. It’s a buddy comedy but the buddy aspect doesn’t feel there. In buddy movies, the two main characters might not like each other at first but they usually have a heart-to-heart about halfway through. With this, it feels like it’s never going to come. Also, with other buddy cop movies, they might not like each other, but at least one of them isn’t trying to humiliate the other. It makes James look like an antagonist to Ben’s dreams. Ben tries hard be nice to James because he loves his sister, but it’s hard when the guy is such a dick. She must be a real freak in the bedroom to make him willing to deal with James.

Note: This is one of those movies I had to put a lot of thought into my score because I enjoyed the laughs, but it was really a toss-up between getting a 60 or a 58, it might not mean much a difference to some, but it means being rotten and not being rotten on a Rotten Tomatoes scale. In the end, Hart won me over.