Reviews from my notepad will be a series of reviews coming out every Wednesday, or whenever I feel like posting it. They will just be quick reviews of films that I waited too long too write a full-out review for, so I just write a few thoughts about it. Or it may be some jot notes I found that have my thoughts of the film. Either way, they won’t be long reads. Here’s the first review: Million Dollar Baby (2004).

Million Dollar Baby may pass itself off as that old generic underdog story that has been done one thousand times before. It does have a few elements to make it that generic story, but this one won Best Picture. With a lot of underdog stories, the feel-good moments often outweigh those sad scenes. That is not the case here. The first half has enough happy scenes to keep you going, but the mood and atmosphere alters completely in the latter half of the film. It becomes much more ominous and depressing, and if you’re not prepared for that drastic change, you may not be open to liking this. The truth is, it’s a good film that may have a very abrupt alteration of atmosphere, but it still transitions that fairly well. The plot is fairly simple, but it uses it to its advantage – and it puts some great themes, and deep emotional content, into play. The relationship that grows between Maggie Fitzgerald (portrayed by Hilary Swank) and Frankie Dunn (portrayed by Clint Eastwood) is quite beautiful. It changes from a sort of loathing on Dunn’s part, to a deeper respect and love, where it feels like a non-condescending father-daughter relationship. This transition is well done, and it is not rushed, so it does feel believable. There are great performances from the cast: Morgan Freeman especially, Hilary Swank and Clint Eastwood. The motivations of Swank’s character is easy to see. She has had difficulties in her life, and that’s probably because of her very rude and selfish family. It’s a film that’s good, but it wouldn’t be worth the price of one million dollars. 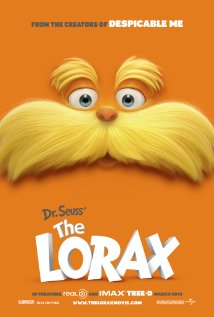 Tagline: From the creators of Despicable Me.

In the walled city of Thneed-Ville, where everything is artificial and good air costs money, a 12-year old boy named Ted (Zac Efron) wants to find a tree, so he could win the heart of the much older Audrey (Taylor Swift). When he learns of trees outside of his city, he sets out to find the Once-ler. When the Once-ler tells him the story of his unfortunate greed for money, Ted gets it in his mind that he’s going to reverse it. The mayor of the town, Mr. O’Hare, is one of the only forces that stand in his way.

One can tell that this is obviously by the creators of Despicable Me, because of the adorable bears and fish and such characters that have very similar voices to those of the minions. Also, Mr. O’Hare is about one foot tall, so he may be just a little smaller than those minions. Did the production company not have enough money to make him tall? It’s just a little silly.

There isn’t a lot of content to carry this film. It’s one Dr. Seuss story that should have remained untouched. The character of Ted is okay, one can understand his motivations, but he isn’t particularly interesting, and he certainly isn’t lead boy material. The only interesting character of modern-day Thneed-Ville is Grammy Norma, voiced by the energetic Betty White. She is the heart of present day Thneed-Ville. The character of Mr. O’Hare is not interesting, nor is his plot line. Who likes a story of a greedy little one foot-tall man selling air? Not I, because this is simply one of the most uninteresting things I have heard of. This all being said, when the Lorax, the much younger Once-ler, and those singing fish and those absolutely adorable bears, are not present, the film really does suffer. They are the emotional heart of the film. There’s a reason this film is not called Ted and Audrey, or Mr. O’Hare’s a Greedy and Creepy Dwarf.

The Once-ler really isn’t generally a greedy man, it was mostly his family that brainwashed him. They reminded me of that family of Hilary Swank’s character from Million Dollar Baby, because when he was out of trees and couldn’t make any more thneeds, they just threw him to the dust and disowned him.

Most of these actors proved that they are not cut out for doing voices for animation. Taylor Swift and Zac Efron, especially. I didn’t see any hint of them altering their voices to make their characters sound more fun. Rob Riggle was just okay as Mr. O’Hare, but he wasn’t very memorable. Danny DeVito and Ed Helms were actually pretty good at doing voicework, and they were quite hysterical. Though, the really only stand-out and memorable voice of the bunch is the lovable Betty White.

The Lorax doesn’t home enough interesting characters or a particularly interesting story to make this flow well and go through the motions in an impressive way. The animation is quite nice, and the messages that it wants to teach children are just okay. The Lorax doesn’t offer anything very impressive, and it won’t stand out in the running of the Oscars’ Best Animated Feature.