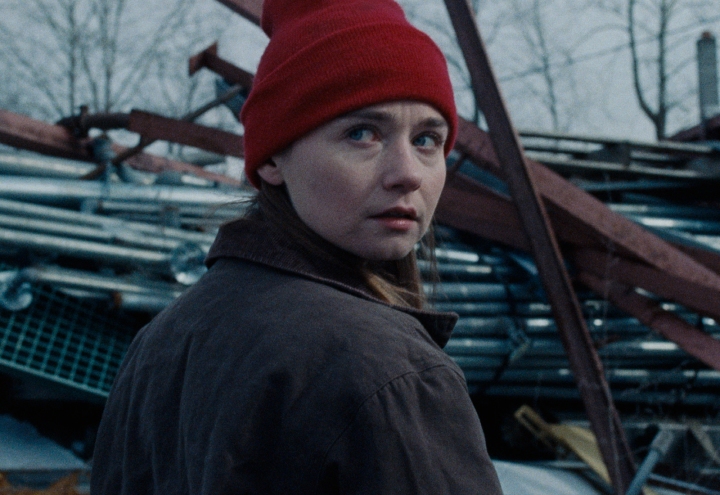 Holler stars Jessica Barden as Ruth, a young woman in small town Ohio finishing her senior year of high school and living paycheck to paycheck with her brother, Blaze (Gus Halper). Nicole Riegel’s writing and direction makes the story feel so authentic as Ruth is so tethered to this small town and feels a hold there because of her brother, so much so that she completes a college application but doesn’t mail it in.

However, Blaze mails the application for her without her knowing and she’s accepted into college. Now, as she and her brother join a dangerous scrap metal crew in order to make more money as the local factory is threatening to close, she’s torn between staying in her small town and surely living there the rest of her life or going to college and trying to make something more of her life.

The film is a lovely slice-of-life film with some raw emotion and is gorgeously shot on 16mm by Dustin Lane, all led by a great performance from Jessica Barden in a more dramatic role, but she still has that signature sarcastic humour in her acting.

I was able to speak with the film’s writer and director, Nicole Riegel, about her film Holler on my podcast The Filmcraziest Show. We discuss casting Jessica Barden in the role and Nicole wanting someone with a sense of humour fitting for women from Appalachian states; making the film in Riegel’s hometown and this being like her coming-of-age story; bringing out the beauty of the town and playing with the colour red; as well as stolen library books.

There’s more in the conversation in between, and you can listen to it directly below, go here to download it or check out the YouTube version of the conversation below, as well. Holler is now available to watch in select theatres and On Demand, as well, wherever you find your films (with the options right here).