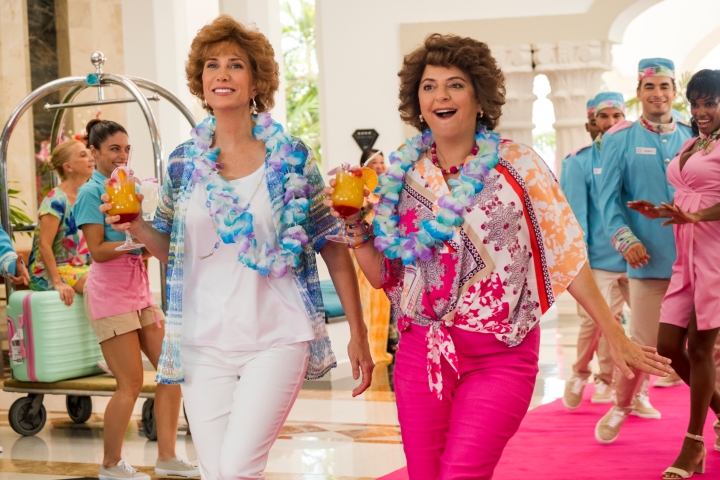 These days, it seems so difficult to be surprised by a film, especially when major plot points are spoiled in the trailer. From watching the trailer for Barb and Star Go To Vista Del Mar, it looks like a fun comedy about two middle-aged women, Barb (Annie Mumolo) and Star (Kristen Wiig) who leave their small Nebraska town for the first time ever to find adventure and new purpose in the small Florida town of Vista Del Mar.

Well, that’s definitely the basics of what this film is about, especially at its heart, but there’s much more and this film is such a pleasant surprise. Now, if you want to know as little as possible about this film going in, stop reading now and just know that it feels so original and it’s a great time.

I went into this only having seen a video on Twitter of Jamie Dornan’s Edgar singing on the beach, and that was really all I needed to know to be even more interested in this. I’m glad I saw the video beforehand because it made me have an appropriate expectation of the bizarre humour in this film, especially since Dornan singing “Seagulls in the sand, can you hear my prayer?” makes it into a film of this calibre.

Seeing this magical, spontaneous musical number within the context of the film, too, makes it so much better. Seagulls have never been so funny. Humour like this will make Lonely Island films (Popstar: Never Stop Never Stopping, Hot Rod) an obvious comp for Barb and Star, as well as the Lonely Island’s “Captain Jack Sparrow” sang by Michael Bolton, which I immediately thought of when Jamie Dornan goes into the “seagulls” hook of the song. That’s also an easy comp because this whole premise feels like a brilliant SNL sketch.

However, Barb and Star is very much its own thing in terms of its unique humour that’s often just play-on-words or just straight-up bizarre, from the pair of musical numbers to the opening of the film where a young paper boy called Yoyo (Reyn Doi) lip-syncing on his paper route just immediately affirms you’re in for something special.

This is especially true when we learn he’s a child henchman working for Sharon Gordon Fisherman (also played by Kristen Wiig), who has a villainous plot to release a swarm of killer mosquitoes on Vista Del Mar. She says there’s nothing that can stop her, and that’s where we meet Barb and Star as they talk shop at their job to the tune of Shania Twain’s “Man! I Feel Like a Woman.” If you haven’t been able to tell, some of the film’s best moments come from its brilliant soundtrack.

By the way, Wiig puts in a dual role as Star and the villain – as she appears in heavy, pale make-up, very much akin to Johnny Depp in Charlie and the Chocolate Factory – and this dual role really makes me think that these characters in this universe could be spiritual cousins to the Austin Powers franchise. I think that’s really because killer mosquitoes is such a Dr. Evil plot to do. I also love these cheesy movie plots of the mid-2000’s, like the plots to take over the world in Agent Cody Banks or the Jackie Chan film The Tuxedo, which I vaguely remember also having modified insects.

Mumolo and Wiig as Barb and Star, respectively, are such a great pair. They write the film, writing together for the first time since 2011’s Bridesmaids, and their follow-up screenplay is consistently funny. It’s also just a heartwarming story of friendship at its core, and learning to be better together and be better apart from each other, as well. I’m a big fan of their Midwestern accents and wardrobe, as the look of the characters and their culottes play such a big role in the comedy of it.

Their co-dependent relationship is so amusing throughout that it feels natural when it’s tested as they do things behind each other’s backs. That’s largely where Jamie Dornan’s Edgar comes in, too, as he meets these characters on a hilarious evening. Dornan made a name for himself most in the Fifty Shades franchise, and he felt so dull because of that character. Here, he exercises his comedic chops and really steals some of his scenes. In that Seagulls musical number, the part where he climbs up the palm tree like a cat who’s decided to climb up a palm tree had me cackling. Those are actual lyrics in this film, by the way.

It’s a colourful and strange film where Barb and Star and their wordplay and culottes take centre stage. The way Mumolo starts rhyming Star and a bunch of words with that accent is so simple yet so damn funny. Even the title of the film, Barb and Star Go To Vista Del Mar makes me chuckle as I read it in Mumolo’s voice.

Does every single laugh hit here? Of course not. Some jokes don’t work entirely – I didn’t care much for Damon Wayans Jr. as Darlie Bunker, a spy who’s sent to help with the plan – but this is consistently chuckle-worthy with its absurd humour and this made me laugh hard. Bring on more surprising comedies like this that subvert expectations, because Wiig and Mumolo have a real winner here.