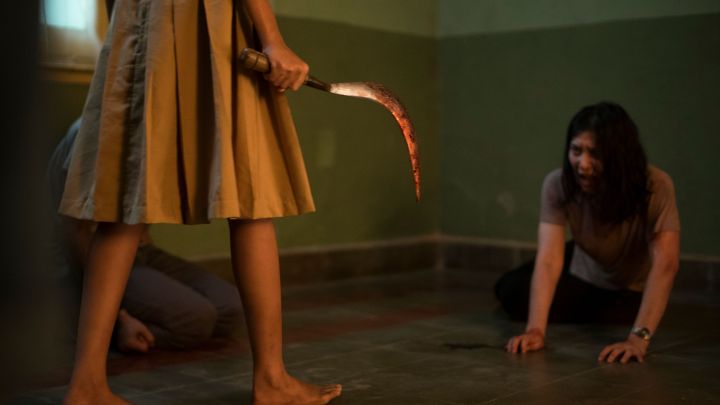 A remake of the little seen Indonesian 1981 film of the same name, The Queen of Black Magic, director Kimo Stamboel updates the setting of the story to an orphanage. Three men – Hanif (Ario Bayu), Anton (Tanta Gintig) and Jefri (Miller Khan) – return to this orphanage after 25 years with their families to visit, as the owner of the orphanage has fallen ill. Once there, the dark history of the orphanage unravels and they soon learn that The Queen of Black Magic wants revenge.

As the characters arrive at the orphanage, the main fault of the film is how slowly it starts with everyone getting settled. Then, it starts to tease out the history of the orph+anage with an effective ghost story – and soon, all hell absolutely breaks loose. Once this film gets going, it doesn’t let up and, at 99 minutes, it’s impressive how much horror fit into one evening of excitement.

It could totally be too relentless for some as it starts out as setting up a creepy ghost story but totally embraces some cringey gross-out horror and body horror. The way Kimo Stamboel might as well be using centipedes as the film’s official mascot is both gross and awesome. Basically everything that freaks me out about horror is here – insects and veins – and it all escalates so quickly in the second act as the black magic powers and manipulation are put on display that it peaks here, but it still leaves enough on the plate for a satisfying finale.

I found myself interested because I wanted to find out what happens to these characters; but I also wanted to learn the whole story of what happened at the orphanage all those years ago. Getting those answers is the most compelling component here narratively.

Some characters have strong backstories. The three men returning to the orphanage have interesting backstories in the way how their past interlocks with the narrative, and their children are obviously fine characters because horror movies love to torment kids, especially the youngest one, Haqi (Muzakki Ramdhan).

It’s a pair of supporting characters that held the most interest for me, with Siti (Sheila Dara Aisha), a caretaker at the orphanage who has been there since she was a child and grew up with the three returning men. She’s stayed there with fellow orphan Maman (Ade Firman Hakim) all these years, and their decision to stay and the backstory of her eye are both interesting. I also really liked Lina (Salvita Decorte), Jefri’s wife, and how writer Joko Anwar took her body dysmorphia and esteem issues and imagined that to an extreme of body horror, which I found creative. To note, this specific scene could be a trigger warning to some.

I’ll surely remember the horror sequences more than the characters themselves, which is the case for a lot of horror, but there are so many great scenes here, especially one involving a TV and a dark hallway, and just the noises of something slowly creaking down a hallway is always spooky to me. Whatever director Stamboel and writer Anwar create here in their sequences, they show they’re at the top of their game and showcasing some of the best Indonesian horror has to offer.

The Queen of Black Magic started streaming on Shudder in the U.S., Canada, U.K., Australia and New Zealand on Jan. 28.