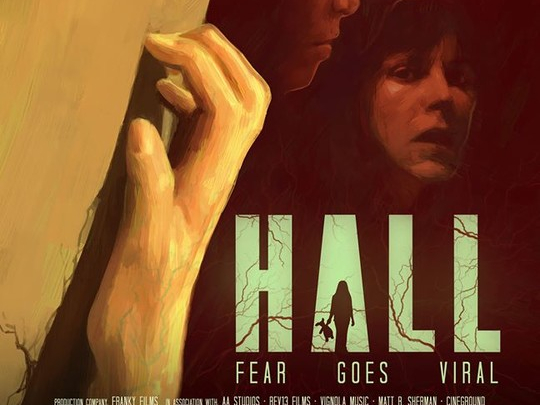 The most compelling aspect of the new pandemic film Hall, directed by Francesco Giannini, is the character development of its two core characters, Val (Carolina Bartczak) and Naomi (Yumiko Shaku), who are both victims of abusive relationships. Naomi has recently escaped hers by leaving Japan and now finds herself at a hotel in Montreal. For Val, she’s still in the relationship, arriving at the same hotel with husband Branden (Mark Gibson) and daughter Kelly (Bailey Thain).

They’re trapped in these relationships so that aspect feels anxious in its own right, and that sense of being trapped leans well into the hook of the film, which is a pandemic breaking out on their floor of the hotel (the third floor). The symptoms of the disease are unique as everyone’s affected in different ways; beginning with paralysis that looks unsettling with zooms on tensing muscles. This eventually leads to an angry, rabid stage and that’s when they feel more like the traditional “zombie.”

However, not all of these people actually reach this angry stage, so there are stretches of this film where the stakes don’t feel active because the infected are not doing much. Still, there’s some suspense in the idea of walking down this hallway where they can become aggressive at any moment. A lot of the horror comes from the sound effects, especially as the infected scrape and crawl across the hallway. It’s eerie, too, listening to them struggle to breathe, and that seems to be the common symptom for all infected.

Now, that’s an eerie similarity to our current world during the COVID-19 pandemic, but I will note that Giannini’s film was shot in January 2019, but just so happens to be coming out during a pandemic. I never found the film exploitative of the pandemic; as it’s a human story about escaping abuse.

The first 45 minutes and set-up is great as we learn about the characters, though as a genre fan of zombie horror, I feel like I should warn that that pandemic aspect and zombie action truly is secondary. There are a handful of scares here, but if you’re expecting non-stop zombies, you will not find that with Hall.

Truthfully, I think that’s where some of my disappointment comes from, as I never found it hit that extra gear that I wanted. It is easy to read the premise of a film and have your own idea of how you want it to go, but that’s not exactly fair. Giannini’s film is its own unique beast telling that bigger human story, and merely using zombies to bring us in. I surely wasn’t expecting the abuse story going into this. By the way, this aspect is well-written in its own right as the gaslighting gets the appropriate response of anger (at least from me).

By the way, the film opens with a core character being infected and crawling down the hallway, which hints at the pandemic to come as we hop back four hours earlier and switch occasionally. It feels random at times, but it’s necessary to let us know the nuttiness we’ll get into, as there isn’t much horror in the first 45 minutes.

Anyway, there’s no focus on frenetic action; the focus is on atmosphere/mood, as well as more psychological kinds of horror. Of course, it’s also about a woman trying to reunite with her daughter during this madness, and that’s where a lot of the film’s stakes come from once the action begins. About the make-up, the infected look so great, especially when we start to see black veins on their arms and then face. The cast also do such a solid job here, and it’s always a delight seeing Julian Richings in film, even if it’s rather briefly here.

This film played as part of the Blood in the Snow Film Festival on October 30, 2020.