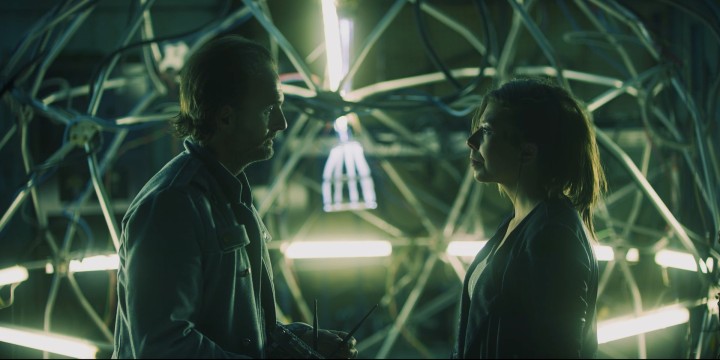 In Benjamin Ross Hayden’s new science fiction film Parallel Minds, an A.I. called URM is investigated by a detective, Thomas Elliott (Greg Bryk) and lab researcher Margo Elson (Tommie-Ambe Pirie) for a lab preparing to release a contact lens with the power to record what the eye can see to recreate memories. This is all coincides with the death of head researcher Elise Perrott (Michelle Thrush).

I enjoy this kind-of high concept science fiction as anything to do with memories or the mind is fascinating to me, and I’m also interested by artificial intelligence. This rabbit hole of a mystery Thomas and Margo go down is compelling, and though we get some aspects of the mystery early on – just specific aspects about URM – there’s a fair share of surprises later in the film, especially as it gets into a wild third act that excitingly leans more into the thriller aspect. The personality of the artificial intelligence feels classic in this genre of film, but the way the team is able to make him feel alive is really fun.

The cinematography here, by Jeff Maher, is strong and I like the way how everything looks, from just the normal look of the film to when someone uses Red Eye and views memories that way. It’s also cool seeing Margo’s memories, as well. The aesthetic of the film is a solid collaboration between the team, especially for art director Shannon Joel Chappell because the sets look futuristic and it captures that near-future North American city very well.

The duo of Thomas and Margo are both great, as their dialogue is always quick and smart. I liked learning about Thomas’ background and the investigation had a cool dynamic, with Margo not even being a detective. The trio of this investigation is a hacker named Jade (Madison Walsh) who holds her own very well here, and though she feels the least developed of the group, it’s because she really likes her privacy and she’s mysterious so we don’t learn that much about her.

Margo’s relationship with her Kookum (Wilma Pelly) is one of the most intriguing aspects of the film here, especially once we learn how much of an impact this Indigenous side of the story works into the overarching narrative. The sentiment that “what we do affects the next seven generations,” is so interesting in science fiction as this product tries to advance the world technologically. Benjamin Ross Hayden’s direction and story in this way really makes Parallel Minds feel like something different, and makes it feel like it’s approaching science fiction from a fresh angle.