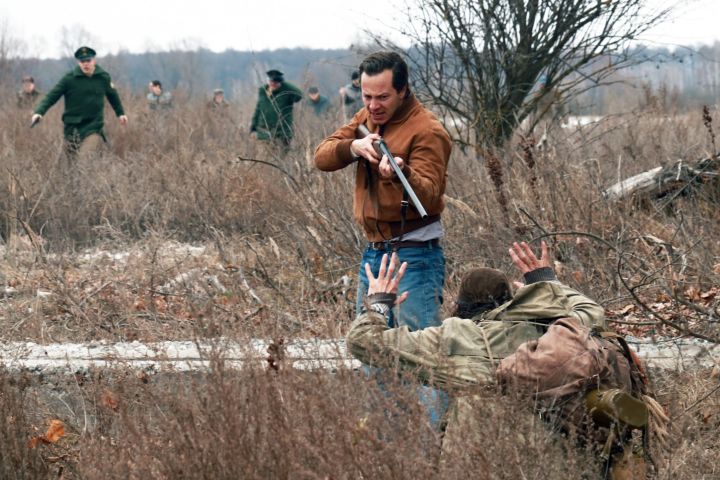 Detectives Patrick Stein (Trystan Pütter) and Markus Bach (Felix Kramer) are called to the small town of Lowitz in Eastern Germany to investigate the disappearance of two teenage girls.

The German detective mystery Free Country is a remake of the Spanish film Marshland (which I have not seen). Free Country is set against the backdrop of 1992 Germany directly after the fall of the Berlin Wall. This immediately introduces a bitterness from one end of the cop partnership, as Patrick is a cop from the West Germany who is being punished by being sent to this small town to investigate the girls’ disappearance.

The two officers have very different methods; to simplify it, Patrick is the so-called “good cop” with very strong morals who always plays by the book (playing too much by the book is why he’s on probation), while Markus is content to use aggressive force if necessary. This brings a brutality to some of the investigations. There are other simpler ways that show their differences, like while they’re on a call to the missing girls’ parents house and when they’re offered a beer, Patrick doesn’t take it and Markus begins to chug his down.

As people themselves, Markus gets less development as a cop trying to get over something from his past and do better. As for Patrick, he’s a more stoic type and has a baby on the way but he seems distant from that. They’re good at their jobs, and the performances as the pair by Trystan Pütter and Felix Kramer is what helps make the film engaging.

By the way, the backdrop of the film being at the fall of the Berlin Wall works its way into the narrative in convincing ways as it affects the town itself. The police chief there wants the officers to solve the case discretely because there’s no need for added stress. The investigative paths this leads the officers down is an interesting one, especially when they get help from the mother of the two missing girls, Katharina Kraft (Nora von Waldstätten). Christian Alvart directs the film very well and he creates a distinct world here that feels bigger than just a small town, as he brings in an aspect of people wanting to leave the town for bigger and better things. Christian Alvart is also the film’s cinematographer, capturing its bleak look and making it look stunning.

As for the pacing of the film, it could be 20 minutes shorter and still be as effective, but it’s a compelling detective mystery nonetheless. The detective work actually feels like they’re doing their job, and only on one occasion does a lead fall on their laps, but the way that happens feels completely fluid with the story itself. For all the detective work they do, though, I would have loved a more fulfilling ending. Most of our questions are answered by the end of the film and there are some solid thrills in this final act, but I wanted more at the climax and the film ends on such a downer – this is not a spoiler for the outcome of the investigation itself – that I couldn’t help but like it more had it ended 10 minutes sooner.

Still, the film throughout is compelling and I loved learning about the other families affected by this disappearance and ones who have been affected in the past. There’s one great detail here about a family losing their daughter and the family just skipped town, not even taking anything from their home. There’s a scene inside this home that paints such an image of a family leaving overnight. All the furniture is still there, and there’s rotting food on the dining room table. The house is still intact, covered in dust, but it hasn’t been lived in for years. A scene like this, among many others, helps me forgive the misstep of an underwhelming last 10 minutes in Free Country.