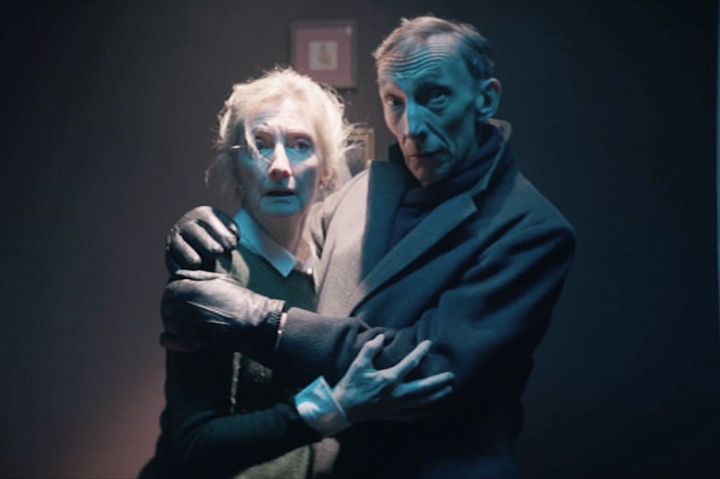 I knew very little about Anything for Jackson going into the film and did not know that this was an exorcism film. Well, it’s actually a reverse exorcism. Basically, this scenario is born out of the idea of there being someone you would do absolutely anything to see again. For Audrey (Sheila McCarthy) and husband Henry (Julian Richings), that’s their two-year-old grandson Jackson. They need to find a host for Jackson to bring him back, and luckily Henry works as an obstetrician and they grab a woman named Shannon Becker (Konstantina Mantelos), a soon-to-be mother.

I thought this was going to merge a kidnapping story with a haunting, and it kind-of does, but it goes down the exorcism route and I was delighted to see how devilish this became. I also loved how writer Keith Cooper interweaved comedy and horror seamlessly, like the irony of this pair of older Canadians being Devil worshippers. It totally seems like they went to the wrong church group one day and just enjoyed what everyone had to say; but them worshipping Satan has to do more with the fact that this religion is the best course of action in getting Jackson back.

More about the comedy. There are great little moments here – like in a flashback when Becker first expresses doubts of her pregnancy and Henry types a message to Audrey on his computer saying “I think I’ve found one!” A lot of the comedy comes from how overtly polite they are though they’ve kidnapped this woman, like when Becker swears and Audrey says that isn’t good for the baby.

The humour is usually in the dialogue and it works well, and it’s also so Canadian that one of the larger obstacles/antagonists in the film is not a cop, but an overpolite Canadian with a shoveling business, Rory (Yannick Bisson, Murdoch Mysteries), just trying to do his job and shovel.

I feel like I’ve spoiled too much already, so I won’t go too much more into specifics, but this film is such a fun surprise with the direction it goes in. Director Justin G. Dyck creates a strong atmosphere here and creates a film where the horror is actually scary, which I think is rare for horror comedies. I wouldn’t recommend going in expecting this to be a horror comedy, as here there’s a focus on the horror and the creepiness of these scenes, as some humour just flows naturally through dialogue.

Audrey and Henry themselves are very likable and seem like very friendly neighbours. Sheila McCarthy and Julian Richings are also so talented and they’re a completely believable couple. The characters feel so authentic because they’re only in this situation because they love their grandson so much and their grief is so strong. I love the “what if’s” in horror and this situation being born from grief and being turned into something this original is great.

It really is heartbreaking, though. Take this line, for example: “No one has time than a grieving family.” Audrey says this to Becker to assure that they’ve thought of everything to make sure they’re not suspected in her disappearance. There’s dread there for Becker; heartbreak in that line for Audrey.

Becker is great, too, and has quite a lot to do despite being tied up most of the film. She tries to get out of this situation by appealing to Audrey’s emotions, and she is also tormented quite a few times here. The ghosts in the film that come out to play are memorable and fun, and it’s just as fun as the devilish side of the film, which leads to a wild, wild ending. I think this film is only going to get stronger on re-watch for me, where I’ll know the craziness I’m getting myself into.