Today I wanted to review the first two Bad Boys films before I post a review of Bad Boys For Life tomorrow. They’re shorter reviews so I’ve just included them in the same post. 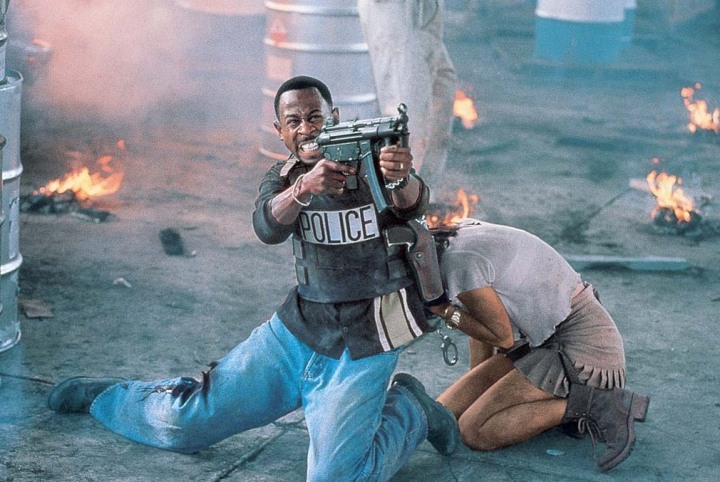 Michael Bay’s debut film, Bad Boys, has some of his signature explosions and action and camera angles, but nothing that’s as extreme as his later films. That’s why the action is still strong and fun in this film. Will Smith and Martin Lawrence’s chemistry is what makes it memorable as their banter is hilarious and the action’s the icing on the cake. Mike’s confidence works throughout and Marcus’ insecurity is a good balance.

Though, I don’t like the mistaken identity bit here as Julie would only like to tell Mike what she’s seen, and Marcus has to pretend to be Mike so they can protect her. In order to keep protecting her, they have to keep this charade going where Marcus is Mike and Mike is Marcus. It’s a bit that grows tired quickly. The villains also aren’t amazing here, but Smith and Lawrence are so funny it’s enjoyable despite its flaws. Joe Pantoliano as the angry Captain Howard is also great.

The first Bad Boys was Michael Bay finding his style, but this film is Bay at his worst. In one scene where Mike Lowrey (Will Smith) and Marcus Burnett (Martin Lawrence) investigate a Haitian gang’s house, they are on one side of the wall and the gang is on the other side. Bay shows us this in dizzying style as he takes the camera around the whole room at least six times.

Bay’s obnoxious style makes the film suffer. The story’s another drug bust tale as the Bad Boys investigate the flow of ecstasy in Miami from a Cuban drug cartel. The dynamic of the film is mixed up with the introduction of Marcus’ sister Syd (Gabriel Union), an undercover DEA agent investigating the cartel. She is also Mike’s latest thing, just don’t tell Marcus.

The chemistry’s still strong and the comedy stands out in the film. The villains are still weak, as Johnny Tapia (Jordi Mollà) leads this cartel. For some reason I remember Peter Stormare being the villain, but he’s just a secondary antagonist as Alexei, a Russian mobster who is selling Tapia’s ecstasy through his clubs.

The action is okay but Michael Bay gets in the way. The film’s entertaining but the flaws here – a weak story and too much Bay – makes this only a guilty pleasure. The biggest strike against this is its run-time, as it has zero business being 147 minutes.

That’s too long for this simple story and it’s bloated. If anything would have ended up on the cutting room floor, it would have been the comedy – like when Marcus observes rat’s mating rituals, Mike and Marcus cussing out Marcus’ daughter’s date, Reggie (Dennis Greene) or when Marcus is on ecstasy. If these scenes weren’t here, this would be completely awful.