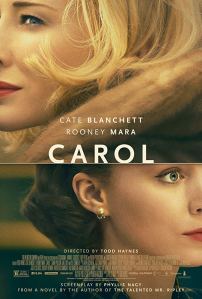 I didn’t fall for Carol as many others have. 30 minutes into the film, I decided to check the Metacritic score because I know whenever I don’t like something that’s great, it at least has an 80 on Metacritic (like 127 Hours which has an 82, or Gravity which has a 96). Carol has a 94 on Metacritic! 24 of the 45 critics gave it a perfect score. I just didn’t see what they saw.

The story is about Therese Belivet (Rooney Mara), an aspiring photographer who falls for a married woman, Carol Aird (Cate Blanchett).

The film is set in 1950’s New York and I’ll start there. On Edward Lachman’s 16mm cinematography, this New York is gorgeous and elegant, and we’re transported there convincingly with the help of Todd Haynes’ direction, Sandy Powell’s costume design and Carter Burwell’s score. I can really tell this is immaculately well-made and gorgeous to look at, I just didn’t connect with the characters that much. I love romance but the first half felt hollow to me.

Honestly, it picked up speed when the pair actually take their Christmas road trip to Chicago. The chemistry between Rooney Mara and Cate Blanchett picks up, their intimate looks turned into something deeper, and their first kiss is a marvellous moment that took my breath away.

The film portrays Carol’s relationship with her husband Harge Aird (a strong Kyle Chandler) realistically and it’s heartbreaking how that develops. This source of conflict is well-written. The way the film portrays homosexuality in the 1950s feels raw and in the moments when she’s persecuted for it, Cate Blanchett is at her best. It’s an age where the character couldn’t be herself. Carol says, “What use am I if I’m living against my own grain?” This is the best part of the screenplay for me – which is written by Phyllis Nagy, an adaptation of Patricia Highsmith’s 1952 novel – and the spot where Carol is her most human. Rooney Mara, too, deserves accolades for her quieter, more subtle performance, and her expressions and glances are where she’s strongest.

That’s my main issue with Carol, it’s best in subtle moments and I just wanted more than subtlety and more than intimate glances. I did enjoy much of the second half, but the film moves at a snail’s pace. There are phenomenal moments, but I was bored a lot of this. The characters have strong moments, but they’re also dull and I am just bummed I don’t love this. The characters only feel lively when they go to Chicago. I like Sarah Paulson here as Carol’s friend and ex-lover Abby, she’s interesting and felt like a real person before Carol and Therese did.

I do like the aspect of Therese’s photography. The way she captures Carol during Christmas tree shopping is beautiful. It’s intimate and that aspect of her character is cool, and it’s really the only thing I liked here pre-road trip. Inspiring her photography is Dannie McElroy (John Magaro). The film casts everyone well (kudos Laura Rosenthal), and Magaro always seems at home in period films. The way he talks just feels like he grew up in 1950’s New York.

Jake Lacy has little to do as her boyfriend. He calls her “Terry” and no wonder she falls for Carol because when she says “Therese,” it’s like a knife cutting butter. It sounds right. Therese seems like the type, too, to not tell him that she hates being called Terry, sort-of like how I don’t make a big deal of people calling me Dan instead of Daniel. In that way I related to Therese but never really related enough. I respect the filmmaking here and admire the film. It’s a beautiful love story with a perfect ending. I wish I could fall for it like Carol and Therese fall for each other, but I could not.