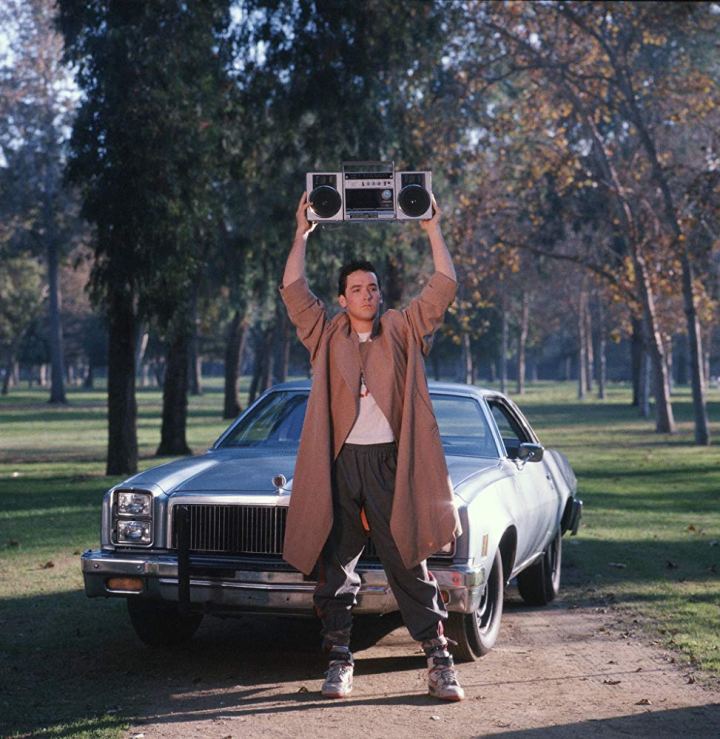 In Cameron Crowe’s directorial debut, John Cusack plays the underachieving Lloyd Dobler who falls for the beautiful valedictorian, Diane Court (Ione Skye) the summer before she goes away to school to England on a scholarship. Even with Crowe’s first feature, he still had a precise voice and he shows that with how the film deals with honesty throughout.

It’s also a film that feels very real-world. The romance does not feel sugar coated. There are iconic moments like the stereo scene, but even that scene was not sugar coated. This is my first time seeing this film (okay I’ve said this with almost every review so far this February, so that’s no surprise) and I’d always assumed that the stereo scene was a big plea for her affection and she came out of the house and he swung her around and they kissed, or something.

But this isn’t John Hughes or Nicholas Sparks, so it’s not that kind-of movie, and the cheesy romance fan in me was kind-of bummed that’s not how it happens. Instead, Lloyd just stands there as Diane just turns over in her bed. It’s still a great scene as the shot of Cusack with the stereo over his head playing Peter Gabriel’s “In Your Eyes” is an iconic and beautiful shot, and I’ve seen it and homages it to it countless times even before seeing this film.

This wasn’t the type of movie I was expecting, and I think that’s a funny thing: Having expectations for a classic film but Say Anything… surprised the heck out of me. It surprised me because of how deep its story felt and how human its characters felt.

As far as the romance goes, the chemistry between Cusack and Skye is strong and natural and I feel like I say that about every movie couple – especially this month and if I had a shot for every time I’ve put it in a review this month I’d be on my third bottle of tequila – but I mean it about them. Cusack has charm as the bumbling every-man and Skye is great as the valedictorian who doesn’t know how beautiful she is.

A big surprise for me here was seeing Lili Taylor, who I really just know as the matriarch in The Conjuring. It’s funny seeing her so young here and I didn’t even recognize her until the party where Lloyd takes Diane for their first kind-of date. Taylor also has an interesting character as Lloyd’s friend, Corey Flood, who gives relationship and life advice as she simultaneously sings songs about a lost love she knows is not good for her. She’s a strong sidekick.

The aspect of the film where my expectations were met had to do with its comedy – I’d assumed it would be a funny film, and it has a lot of good comedic moments. Truthfully, I can’t remember any of the laughs, but I remember laughing. The one enriching aspect of this film is the fantastic John Mahoney as Diane’s father James, a nice guy we like from the start.

He’s an important figure in Diane’s life and Crowe uses the relationship of Diane and her father and the relationship between Diane and Lloyd to display honesty and dishonesty with equal effectiveness. The pairing of these two relationships was utterly fascinating, and the sub-plot of James being investigated by the IRS leaked into the main storyline. I was still very interested in the romance, but before I knew it I was getting equally as invested with the father-daughter relationship. I think an effective plot like this that feels so naturally in the overall story is why Cameron Crowe is such a great writer and director, and we’ll just give him a pass about Aloha.