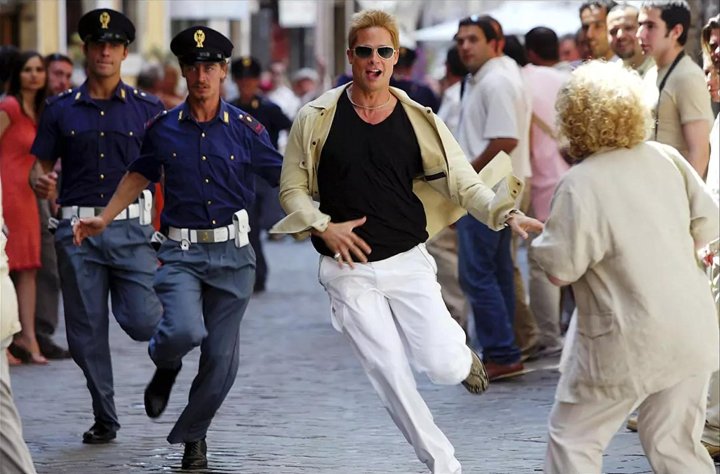 Spoiler warning: There’s a spoiler for “Ocean’s Eleven” in the opening paragraph.

In “Ocean’s Twelve”, the old squad reunites to do one more heist when Terry Benedict (Andy Garcia) comes back for what they stole from him in the first film. It’s three years later and he wants the money back with interest. Without much of a choice, the Eleven must do what they do best: steal things to pay off their debt.

A new character here is Catherine Zeta-Jones as a detective, Isabel, on the tail of the Eleven. She also gets nice character moments and doesn’t feel cliché, even though she’s a love interest of Rusty (Brad Pitt).

She’s one of the film’s antagonists, and there’s also the Night Fox (Vincent Cassel), a rival thief who fancies himself the world’s best thief, and challenges Danny’s (George Clooney) team to stealing an item. The character sounds name sounds more like a comic book villain, but he’s just a petty thief.

The individual heists in this film are still entertaining even though they lack the flair of its predecessor. There are a lot more problems raised in this film but there are also a lot of interesting solutions.

The fact that the franchise exists in the real world with real celebrities gives comedic opportunity for writer George Nolfi. This includes an amusing cameo by Topher Grace, and it also makes things get really fun when Tess (Julia Roberts) gets dragged into the film’s scheme.

Most characters get their chances to shine again. Nolfi thinks of creative ways to get characters out of the picture for some time – like sending Yen (Shaobo Qin) somewhere else in a duffle bag, even though his character’s role is small enough as he just speaks Chinese.

Sometimes getting these characters out of the way for awhile is helpful because it’s hard to keep track of all of them. It’s also interesting to watch the Nolfi tinker with the formula more and see how it works outside of Vegas. It still works and offers entertainment, and it’s nice to see them stealing things again.