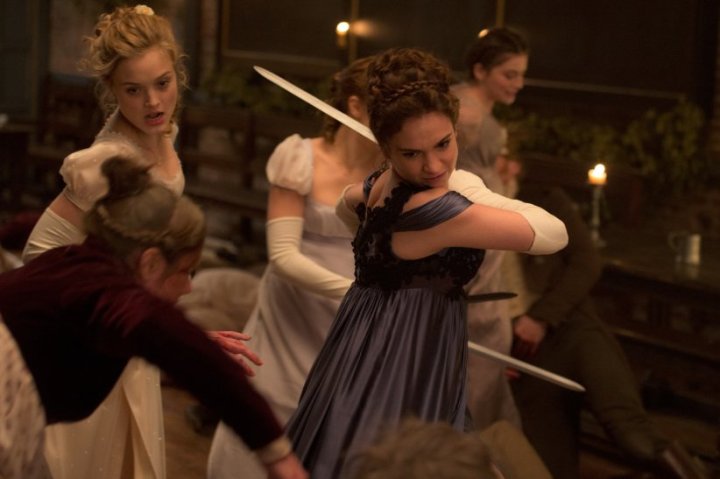 When pride met prejudice in the 1813 Jane Austen novel, there were most certainly no zombies. Fast forward to the zombie craze in cinema over 200 years later, and the storyline is full of ‘em. Hey, at least PPZ sounds cool.

Pride and Prejudice and Zombies concerns the two primary characters Elizabeth Bennett and Fitzwilliam D’Arcy, who are essentially the same as the original novel, but they both have a penchant for killing zombies.

In the film, Bennett likes the look of D’Arcy, smiling at him and D’Arcy observes that she is muscular but “not so much to look unfeminine.”

This version is based on the novel Pride and Prejudice and Zombies by Seth Grahame-Smith (co-written by Jane Austen, who I guess came back from the dead to help write it), and it’s as mediocre as you might expect.

It aspires to be harmless entertainment in the likes of Abraham Lincoln: Vampire Hunter, but it really isn’t much fun.

The narratives are kind-of bland. Elizabeth still doesn’t like the idea of being pushed into a marriage without affection – but another reason is because she doesn’t want to trade a sword for a ring.

Women also can’t be well-trained and well-educated, it’s one or the other. Elizabeth also learned zombie attack training in China, instead of Japan where the higher social class studied their fighting skills.

The character sisters in this film, while they have a good chemistry, talk about their love lives over choreographed sword fights instead of just around a table – so that amps up the dialogue ever-so-slightly. The director, Burr Steers (who also penned the adapted screenplay) ensures to show a lot of skin and heaving bosoms of the lovely sisters.

It’s relatively new territory for Steers, but he does well with the fight scenes, but there still isn’t a lot of excitement in the big action set pieces. Still: It’s decent for a guy whose previous credits are directing Zac Efron in teen comedy 17 Again and the moody drama Charlie St. Cloud.

The dialogue is decidedly pretentious, trading something like, “Dude, the undead are rising,” to “the undead reach out from beneath the wet Earth.” Or something like that.

The costume, set and production designs are attractive, but usually come with the territory for period pieces.

Lena Headey has a turn as a sadistic Lady Catherine de Bourgh, who is a famed zombie slayer who sports an eye patch.

Her introduction is a brief, random 10-second thing of her screaming in victory on top of a pile of zombies with her eye newly missing. That is one way to assert that she is a dominant woman not to be crossed.

The exchanges between characters are forgettable and so is the chemistry between leads Lily James (Cinderella) and Sam Riley (Maleficent), even though they do fine separately.

The PG-13 zombie violence is a high point of the film – which isn’t saying much because it’s tame.

Many are coming for the zombies, but it’s very much a boring romance. It could be called a rom-zom, with the zom in zombies the only redeemer.

One thought on “Pride and Prejudice and Zombies (2016)”