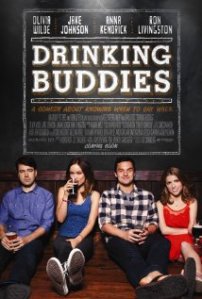 Drinking Buddies is an experimental romantic drama/light comedy directed by Joe Swanberg that follows best buddy brewery workers Luke (Jake Johnson) and Kate (Olivia Wilde) who also like each other, but they both have other romantic interests. This is a film bathed in the idea that beer taints the ability to make good decisions, and you can’t always tell if what you’re doing is right or wrong. It’s like you’re looking at the situation through a glass of beer. This is what helps this film differentiate from other generic romantic drama/comedies, even though this still isn’t good.

The material at hand just isn’t strong. I learn that the film is entirely improvised, and there wasn’t a script written, only a vague outline of plot and order in which events might take place. This is something that does allow the acting become more believable, but it’s a film that just largely fails. There are just so many other performers who are a lot better at getting laughs from their audience. The actors in this film only get an occasional chuckle. But the cast, also including Anna Kendrick and Ron Livingston, is quite charming.

The banter between them all is sometimes pretty good. They all have a great chemistry, which saves the film a bit. even when it’s a bit awkward at times. But heck, Kendrick could have good chemistry with a wall. The chemistry between everyone is very sweet. It’s a realistic look at relationships and how picking the person you’ll spend your life with is a hard decision. It’s a look at the confusing times of relationships, too.

Everything’s a bit frustrating because the viewer probably just wants the two couples to swap partners. The film is sometimes frustrating (this is mostly the third act) and sporadically funny. This finds a strange balance between mildly charming (because of the cast) and mildly boring. The characters are okay, just simplistic. This is just all pretty boring and often frustrating, and it’s just intensely forgettable – and it all feels pretty empty by the end of it all.