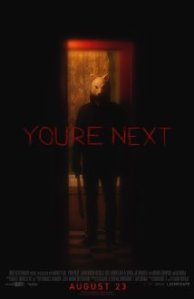 I love horror films. It’s one of my favourite genres. A lot of them aren’t that great, but I think if there is a great one – it’s always a lot more pleasing than say, a good animated film – because that’s a consistent genre. One good horror film of 2013 comes in the form of Adam Wingard’s You’re Next, that actually premiered at the Toronto International Film Festival back in 2011. It’s the latest film to enter an indie horror sub-genre called mumblegore; so I guess that name indicates you should have a tolerant stomach for gore.

It follows a mildly simple premise that, upon hearing about it, you probably wouldn’t expect much out of it; but I couldn’t help but be excited about it because of the trailer’s effective use of Lou Reed’s “Perfect Day.” The plot: The Davison family are having a wedding anniversary at their house that’s isolated and a run through the woods away from their neighbors. In some brilliance – and evident premeditated planning – the neighbours get killed off in the opening scene. During the family’s dinner, an arrow flies through the window. They are under attack. Little do the attackers expect, there is a guest in the home that has a knack for putting up a wicked fight.

The pretty Australian Sharni Vinson portrays Erin, the true badass of the film. It’s nice that it turns the way films portray women as weaker than men right on its head. It’s also refreshing that this film gets set up like one’s average revenge horror flick, but turns out to be a really fun, lite satire, in the way that the title is self-aware (you’re next, guys!) and filmmaker Ti West portrays a character who is a filmmaker, to name a few examples. It’s just self-aware a lot of the times, too – and a lot of the kills are really fun.

That’s the point, right? Movies like this are just very entertaining. It’s told with the thrills of The Strangers and the witticism and entertainment value in the vein of Scream. While it not be as scary as the former or as hilarious as the latter, it still has its fair share of each – and it turns out to be a film where a lot of the characters aren’t helpless. Some still make some pretty crappy decisions, but that’s expected. The only type of horror where usually the characters don’t make the worst decisions is in psychological horror. This is definitely not that sort-of film.

There’s a great amount of surprises in this film. Don’t worry, none will be spoiled. One criticism I have is a scene at the end, which I didn’t think was necessary – but it did show this film is just here to entertain the hell out of you. Simon Barrett writes the film very well. One aspect that is really cool are the animal masks the villains wear: a fox, a lamb, and a tiger. Their animal masks, and their crossbows as weapon of choice, says that they’re predators (well not so much the lamb). Also, and more importantly, that humans have animalistic instincts. I think that’s a hidden meaning in the film – and one that’s some great food for thought to be found in a horror flick.