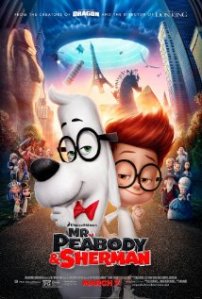 Let’s take this into consideration right off the bat: Mr. Peabody and Sherman won’t win best in show. The filmmakers don’t have the aspirations to make the greatest animated film out there – their intention is to entertain all ages with colourful animation and clever humour. This pleasant surprise succeeds with a sweet-natured flair. The main character is Mr. Peabody, voiced by TV’s Modern Family star Ty Burrell, who is one of the world’s greatest minds – winning Nobel prizes and holding knowledge close to his heart. He does all this, even though he is a dog. (That’s why the ‘best in show’ joke is so funny!)

He adopts a boy named Sherman (voiced by Max Charles), and he goes through the struggles of parenting. This dynamic makes it mildly similar to Despicable Me; at least its messages of parenting, and it makes me think of it because Peabody is an adoptive parent. (Some additional messages in the film: Acceptance and understanding each other’s differences, like being adopted by a dog.) On 7-year-old Sherman’s first day of school, he has a run-in with a bully; saying that sadism starts fairly early. The bullying is given by a young genius in her own right named Penny Peterson (voiced by Ariel Winter, who is also well-known for Modern Family). She’s angry at Sherman because he shows her up with a fact on George Washington that is not particularly common knowledge. He found it out by actually hearing it from George Washington himself. You see, Peabody built a time machine called the WABAC that allows a very cool form of parenting where he can teach his son history first-hand. I think it’s a cool way to teach history, even though it offers historic events in a simplistic way to its audience. It still must appeal to kids, correct? To solve the bullying issue, Penny and her parents (voiced by Leslie Mann and Stephen Colbert) are invited over to dinner. Young Sherman shows her the WABAC and they go on a fun adventure, but also leads to a created time rift that they must fix.

I must assume some of you are already turned off by the premise itself – a time-travelling dog. (A.k.a. my Mom who also doesn’t like talking LEGO minifigures, but has nothing against a singing snowman.) Truthfully, it is a little funky – but it’s part of the film’s charm. The film is clever in the way that it solves that whole “butterfly effect” issue. Peabody makes a rule that they are only allowed to travel back in time – for educational purposes, because who wouldn’t want to go on field trips like this? It seems that Sherman learns better if here’s there when it happens. The film does have a simplistic and somewhat formulaic narrative, but a thoroughly entertaining one. Keep in mind this is a film made for children so fans of time travel flicks are not going to get much complexity.

Older audience members will find clever, jokes that rely on pop-culture; referencing films like Runaway Bride and My Big Fat Greek Wedding, to name just a few. The events they travel to (French Revolution, Ancient Egypt, Trojan War) does give children a much simpler and basic way to learn history and learn basic and mildly accurate facts about these historical events in the process. For instance:  The film depicts that the people of the French Revolution revolt because Marie Antoinette loved cake way too much – and they don’t have bread because they are “exceedingly poor,” and they are angry because Antoinette is eating all that she can.

I think fans of Ty Burrell’s will enjoy his work in this film a lot because this sarcastic and often punny (“I think women get married too old in Egypt, but maybe I’m just an old Giza!”) sense of humour fits his comedic delivery to a tee. It is similar to his character on Modern Family, to be perfectly honest. He fits this role perfectly, which originated as a character on the television show Rocky and His Friends from the 1950’s.

I must confess that there is one recurring joke that gets tired, where Sherman laughs at one of Peabody’s jokes and then says “I don’t get it.” That might be purposeful in more ways than to try to get the audience to laugh – it could represent kids who actually don’t understand the joke, whether it just be a historical fact they just don’t know. Another miss at humour which runs into excessive grounds is where Colbert’s character is trying to show Peabody up and asks him to play a series of instruments after another – so there just a whole bunch of Peabody’s on-screen at one time. It could be working as subtle foreshadowing; but it just runs on a bit too long. Colbert has fun in his role. The other voicework ranges from okay to great. I think Max Charles is just alright as Sherman. Allison Janney is good in a role that is uninspiredly evil. She represents those against dogs adopting children. Stanley Tucci has some brutally funny voicework as Leonardo Da Vinci, and his likable comedic styling is worth the watch in itself – as far as I’m concerned.

The creative film is a ridiculously fun, fast-paced adventure flick that has a quick narrative. The animation is just stunning, even if it seems to have taken character designs out of The Incredibles handbook – as Sherman has subtle similarities to Dash, which isn’t bothersome; but it gets strange when baby Sherman has an uncanny resemblance to the baby Jack Jack. Imitation is the sincerest form of flattery – and I wouldn’t be surprised if director Rob Minkoff attended that A113 software class for animators.