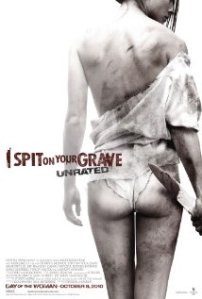 Steven R. Monroe’s I Spit on Your Grave is the remake of Meir Zarchi’s 1978 film Day of the Woman, a film so brutal it was banned in many places (a few provinces in Canada, the Phillipines, China). It’s an exploitation flick that analyzes the human capacity for cruelty. It also raises questions of, if you were raped and left for dead, would you seek revenge against those who did it? The film’s premise is that a writer named Jennifer Hills (Sarah Butler) rents a cabin in order to find quiet which will help her finish her novel quicker. A few locals decide to have a little fun with her after the leader is sort-of humiliated at the gas station at which he works. In the meantime their mentally challenged friend (the unconvincing Chad Lindberg from The Fast and the Furious) can lose his virginity.

The crew gang rape the innocent Jennifer and leave her for dead. Revenge tactics ensue. How she gets the materials to conduct these acts of revenge is beyond me, but she does it. It seems like she gets a few of her materials from a different, abandoned cabin she finds in the woods.

The film is just a major exploitation flick that isn’t very good. It’s uninspired redneck cruelty because they think city girls are much too prissy and stuck-up. One of the crew is Damien from Mean Girls. He’s okay in this. Everyone in this is just okay. Butler expresses the human capacity for violence pretty well, but isn’t she becoming animalistic like these Neanderthals? Granted, it’s for inspired reasons, so the film says karma is just a bitch. Horror fans might like this violence, but it’s just okay for me. Cringe-worthy and disturbing in more than a few parts make this film hard to watch. The subject matter should tell you what this film has in store for you.