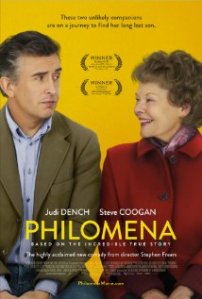 Today, teenage pregnancy is a commonplace. There’s even a TV show about young pregnant girls called “16 and Pregnant” that premiered back in 2009. It seems like a stupid premise to me, but it shows how accepting people are of it these days. Back in 1960s Ireland, around the time of the Magdalene sister homes, if a young girl was pregnant – a lot of parents would be so ashamed that they’d disown their children and force them to live in a convent. They wouldn’t have any other place to go, and they’d have to work their asses off to repay the nuns.

This is what happened to Philomena Lee, a 16-year-old who had a child, and when her son was about 3 years old, he was adopted. Ever since, Philomena (Judi Dench) has kept this a secret. On the son’s fiftieth birthday, Phil (now in her 60s) tells her daughter about Anthony – and with their luck, they find a political journalist, Martin Sixsmith (Steve Coogan), who was recently let go from his job, to take on this human interest story.

After fifty years of Philomena not knowing where or how her son is doing, the pair set off to find Philomena’s son, following leads and information the convent might possess; which, unfortunately, isn’t much to go on. Martin has to use his journalistic skills to find where the son might be. One reason this film is so charming is because these characters are so different. Martin is a bit more realistic thinker who thinks questions like ‘Do you believe in God’ are difficult to answer. He’s more pessimistic than Philomena; but almost equally funny. Philomena is one of those people is genuinely interested in people say, and she finds humour in the simplest of things – even if she doesn’t realize that she’s being hilarious. That’s what helps make this a simple comedy in parts. It’s lightly entertaining but it’s an effective drama, too. It’s a different sort-of road trip film, but a refreshing one.

I’m glad that there is a surprising layer of great comedy, because without it the film would be boring. That’s a reason I was hesitant to see this, because the story sounds like it could be good, but it also sounded slow to me. Judi Dench’s great performance helps; she plays a character who only wants to know how her son’s life is going, and know if he’s ever thought of her. Like I said, she is very funny, as well. She is a character who carries around this secret and its shame hand in hand. I think Steve Coogan’s performance is great here, as well, because his comic delivery is just priceless. He is considerate of Philomena’s wishes, and doesn’t always feel like a journalist in it for the money. I think he’s an underrated actor. He impressed me here as an actor and as a co-screenwriter – I’m sure he had a big hand in the witty dialogue.

The friendship that is created is charming. The characters’ beliefs are challenged throughout from what they learn along the way. This is also an ideal film for schools that might want to express the Catholics’ beliefs back in the 1960s; it seems to me some nuns still hold those beliefs. Those would be the old-fashioned ones. I think this is a film that should be experienced because of its subject matter. It’s powerful and is emotionally gripping. It’s the idea of being taken away from one’s family that gets to me. I mean, if anyone tried to take me away from my mother, heads would freaking roll!

There’s a quote commonly used by critics “You’ll laugh, you’ll cry” and oftentimes, those can only be applied to great films. Only so many directors and writers have that ability. Alexander Payne has a true knack for it, and even his co-writers on “The Descendants” Nat Faxon and Jim Rash do, too, as expressed in “The Way, Way Back.” This film’s director, Stephen Frears (“The Queen”) has a talent for it as well. I laughed a lot with this one, but for me, the “You’ll laugh, you’ll cry” line can only partly be applied.

There’s enough emotional content here to make many people cry – because this is such a powerful subject. I didn’t cry, because it takes a lot for me to cry at a film. This might sound cheesy, but even though I didn’t cry on the outside, my soul ached for Philomena in parts – because she is just such a likeable and often relateable character. I relate to her because she likes “Big Momma’s House.” She at least laughs at a preview on hotel Pay Per View (also giving an idea of what year it is, because there are more new releases then older releases, so this film is set in 2000 or 2001). I hope she got around to watching that movie.