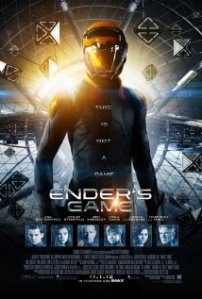 Ender is conveniently named because he is called upon to lead the war against the genocidal species the Formics after they nearly annihilated the human race in an earlier invasion. He must end it all, in a film where war tactics are prominent and intriguing. You just can’t win one battle, you have to win the war; keep \kicking the enemy, and it will send a message. It will make them never attack again.

Many of these ideas are enforced by an intense Colonel Graff (Harrison Ford), a generally unlikeable but important character. Major Gwen Anderson (Viola Davis), one who focuses on the psychological status of the young students recruited by the International, is there to balance out Graff’s intensity. At least, that’s how I see her. I am afraid if this character wasn’t present Graff would be completely intolerable. Ender (Asa Butterfield) is the perfect choice to lead this battle because he’s smart, and has a near-perfect balance of compassion and violence. That is ideal for a war leader, at least in the International’s eyes.

Ender is the third child to go through this sort-of training, after his brother and sister. His brother, Peter (Jimmy Pinchak), couldn’t get very far because he resorted too quickly to violence. His sister, Valentine (Abigail Breslin), made it further into the training, but couldn’t advance because she was too compassionate, which is a believable trait for a character portrayed by Breslin. (She just seems kind and genuine, if you ask me.) Her character plays a much bigger role in Ender’s development than Peter. I find it interesting in this world that the parents have to file a government request in order to produce a third child. It seems to me that this might be put in order so the population doesn’t get out of control – in case the Formics attack again and they don’t kill as many humans? That’s my theory.

I am not sure how faithful this is to Orson Scott Card’s book of the same name, but I like many aspects of the film and I think Ender is a compelling character, a smart and emotional one with strong morals. He also sees many troubles of having this pressure weighing on his shoulder, because he is relied on to be a new leader. Everyone needs a leader. These war tactics are thought-provoking, and I think that’s why I prefer the first two thirds of the film over the third act. The third act has some good moments but the actual battle is lackluster. But the visuals are good, and I enjoy the set-up of this familiar science fiction flick. It’s a movie with good action scenes, a good cast and interesting aspects, but the fact that the whole movie leads up to an unrewarding battle is disappointing.

There’s some great battle training sessions that are entertaining. It’s like an anti-gravity laser tag, and it looks like a fun sport that I’ll probably never play because I don’t like heights. Haha. Ender makes a few enemies during his training, mainly Bonzo (Moises Arias in his third film of the year) who is a little man with a big Napoleon complex. He treats everyone like crap if he gets shown up. Well, he treats everyone like crap all the time. I’m liking Arias more and more though; even in an unlikeable role. Ender makes a friend, too, in Petra (Hailee Steinfeld), but it’s never crystal clear if they’re romantically involved or just friends. One more thing: There’s a really cool video game sequence that reveals Ender’s mental state to Viola Davis’ character and it’s just beautifully animated. I think this film would make a great video game – but as a movie, it leaves a bit to be desired as an sci-fi action flick.