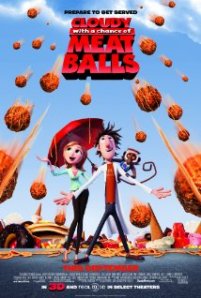 “Cloudy with a Chance of Meatballs” is, I’ll admit, much better than I thought it would be. I had no interest in seeing it when it was initially released, because it sounded a bit too silly for my tastes. But then I realized the guys who are behind this movie, Phil Lord and Chris Miller, directed one of my favourite action comedies of the last few years, “21 Jump Street.”

So, I thought I’d give it a shot since it was playing on television. And, if I get the chance to see the sequel, I can – because now I’ve seen the original. The premise is simple, adapted from an apparently beloved children’s story written by Judi Barrett. I’m not sure if it’s a good adaptation or not, but the basic ‘I wanna be something!’ character arc is present.

The main character, Flint Lockwood (Bill Hader), has been inventing unsucessful, but sorta awesome, things all of his life – and that’s his dream, to be a revered inventor. His father (James Caan) disapproves of the choice, as he doesn’t understand his son as well as his late wife did.

He finally gets his shot with a machine that turns water into any kind-of food that you desire. He manages to inadvertantly launch his machine into rain clouds, after a run-in with the law, and it rains cheeseburgers. This puts the island below the ‘A’ of Atlantic Ocean on the map; even though the town was previously known for its sardines, until everyone realized they are gross. The mayor of the  town (voiced by Bruce Campbell) sees this as an opportunity to make Swallow Falls a real tourist hot spot; so he aggressively urges Flint to make it rain three meals a day. The news reporter, Sam Sparks (Anna Farris) who is in town, becomes a weather girl and takes advantage of this weather phenomenon.

While the delicious food makes the townspeople happy, the excessive use of the machine can dangerously mutate the food, but the shady mayor ignores Flint’s pleas to make it stop; by telling him the whole town loves him. As expected, chaos ensues – on the day when spaghetti and meatballs are the main course.

The premise is effectively simple, and allows really colourful scenery to happen. I like the animation a lot, even though the character design for Flint makes him look like an odd type of bird. The character design for the acrobatic police officer Earl Devereaux is truly clever. He is voiced by Mr. T, and he has a T-shaped bald spot. Bill Hader, Anna Faris and even James Caan aren’t particularly memorable. It’s a good thing that Mr. T, Bruce Campbell, Neil Patrick Harris and the purposefully irrtating Andy Samberg are there, because they balance out the voicework and make it better. Neil Patrick Harris plays the role of a scene-stealing monkey named Steve, who can speak through the invention of Flint’s. This film is silly and fun for the kids, and there’s enough clever humour to keep older folk mildly entertained.