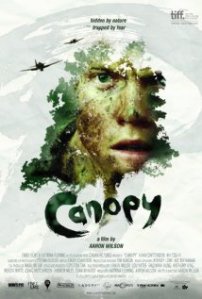 “Canopy” is a World War Two film set during the Japanese invasion of Singapore in 1942. The film follows an Australian fighter pilot who is shot out of his plane, and wakes up in the treetops, suspended by his parachute. He must set out on a perilous journey to find sanctuary in this foreign jungle. Thankfully, he eventually finds a companion, a Chinese soldier who is also lost. They must join forces to make it out of this jungle alive.

This is a type of movie that people would see for the art of it, and not the sheer entertainment. But by god, it deserves to be seen. It’s an effective experience, if a flawed one. Disappointingly, some may find their attention wandering during the feature. This is only in some scenes, so it usually does a good job of maintaining the viewer’s attention. The feature is led by a tiny cast. Seng, the Chinese soldier, is portrayed by Tzu-yi Mo. He assists with carrying the film, and he is fairly memorable.

Khan Chittenden, whose character is an Australian fighter pilot named Jim, is called to carry the film the most. He does an admirable job. There’s power in his silent performance – he acts well with his eyes and actions. He leaves an impression with what he must do, because it is definitely more challenging to act with little dialogue. For much of the film, it is only him and his thoughts – and the thought of putting oneself into the shoes of this man, is terrifying. He is vulnerable in this unfamiliar jungle, and only keeps going because it is his survival instinct. His performance is realistic and believable.

Aaron Wilson is also a star of the film as director. He may be behind the camera, but he controls this set and he creates a well-written story. It must be challenging to write a story with little dialogue. I only remember there being about less than ten words in English, all near the end; and other words in a foreign language that we could not understand. I think the way he does it is effective. When a foreign language is spoken, there are no subtitles. Jim does not understand what these people are saying, so why should we? The experience is enhanced because of this. These two people who are trying to survive must get over the language barrier and communicate.

I like the way Wilson goes about handling this story. I learn from the Q/A after the film that, through research, he found that soldiers don’t remember conversations, but all of the sounds in the unfamiliar land and the actions they made. That is why there is such little dialogue. I’d never thought of that experience would deem true for a soldier, but it seems like a true thought after one thinks about it. It’s an innovative way to go about a film like this. I haven’t seen anything like it before. The characters are simply characterized. They are both soldiers fighting for their lives. It is confirmed that Jim has a family back home, but for Seng, it can be assumed. This film’s characterization is far from conventional. This shows the strong influence war has on humanity, and the impact it will leave on a person. This is a nearly wordless experience, but hardly a silent film.

There are constant sounds from off-stage. Gun shots, explosions, twigs snapping, people approaching, which causes a state of panic. The sound design, landscapes, imagery and cinematography are phenomenal. It’s some of the best so far this year, and the surroundings Stefan Duscio shows on-screen are gorgeous. Dialogue takes a back-seat to the focus of sound design. In one scene, Jim is walking around in the jungle (like he does for most of the 80 minutes), and we are looking down on the forest. Audiences might have to look for him for a few seconds before they find him making his way through the terrain. I imagine that is how Jim feels throughout, but it takes him much longer to find any sort-of destination, in this terrifying jungle. That is effective. The two central performances, direction, writing, sound design and cinematography and photography are the film’s best aspects.

Many will have re-adjust their expectations for this experience, because it is so different. Whoever might be expecting a thriller might be disappointed. It’s heavier on the natural drama than it is on thrills, but has a controlled level of suspense.

This is a technically impressive experience. Some might find themselves bored at times, but it’s usually quite engaging. This experience shows that a story could be effectively told through sounds. There is not many other films like this, and especially not WWII features. It is memorable because it is so different and unique. Both Aaron Wilson and Khan Chittenden have bright futures ahead of them. I learn from Wilson that he has a film that has dialogue is on the way, so I will anticipate that one. Much like the sounds of war that soldiers remember for awhile, this feature leaves a lasting impression, right up to the final shot. Definitely see it, because it isn’t time-consuming and it’s quite an experience.