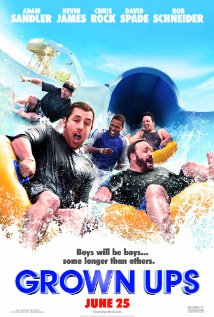 “Grown Ups” doesn’t have the strongest plot; or any evident plotline, for that matter. It’s really just a movie about… Five guys, who sound like they want to grow up, but they’re really just big kids at heart. They’re reuniting after thirty years because of the death of their elementary school basketball coach. They’re lifelong friends. Sandler plays the big-time Hollywood agent, Lenny; Rob Schneider plays Rob Hillard who has an appreciation of ladies in their mid-70s; Kevin James plays Eric Lamonsoff, who has a four-year old who still breast feeds, and a daughter with anger issues; Chris Rock is Kurt McKenzie, the nice husband with a nagging wife; and David Spade is the bachelor, Marcus Higgins. The female actresses are decent, mostly just Salma Hayek and Maya Rudolph. The kids are annoying.

No matter how many times you might watch this movie, you’ll only remember the names of Marcus, Lenny and Lamonsoff. There’s very little character development and plot. They’re mostly just comedians hanging around. There’s no focus on plot or characters, because it just isn’t so important to Sandler. Since the plotline isn’t strong, it honestly feels like it could end at any point. I can forgive that a bit more than other movies, though, because at least it doesn’t fail in every aspect. It is a funny movie. There’s chuckles throughout, and two scenes that are hilarious. Most of the humour is hit-and-miss, however, because the majority of the jokes are predictable. And the balance of comedic talent and big laughs is uneven. The direction is also pretty bad. It feels as if Dennis Dugan wasn’t on set for a week.

This is mostly just a forgettable comedy that doesn’t have a particularly good plot. It’s decent background noise, regardless. This still gets a pass.

Note: As much as this is a guilty pleasure of mine, I don’t think upcoming sequel looks very funny at all. I laugh once during the trailer.