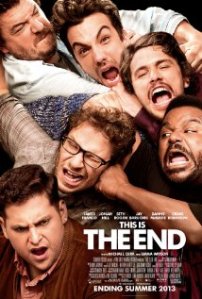 Hollywood is obsessed with a lot of things. One of their current obsessions is the apocalypse. Mostly because, if we survived 2012, why not, right? This is the End is summer 2013’s second apocalyptic movie (or first if you don’t really count After Earth), and it’s a comedy that feels completely fresh. It’s based on Jason Stone’s short film entitled “Jay and Seth vs. the Apocalypse”, set on an ordinary night in Los Angeles.

Many celebrities including Seth Rogen, Jay Baruchel, Jonah Hill, Craig Robinson, Michael Cera, and Emma Watson, amongst so many other cameos, are partying it up at James Franco’s mansion. They’re having a good time, drinkin’ beer, abusing cocaine (if Michael Cera doesn’t hog it all), joking around; doing what celebrities do. Soon enough, a huge hole opens up and wah-bam, it’s the end of the world. Half of the celebrities’ cameos end in gory demises, and there’s only a small group left to fend for themselves in Franco’s mansion. They take inventory, and it’s up to Seth Rogen, Jay Baruchel, Jonah Hill, James Franco, Craig Robinson, and the trouble-making Danny McBride to wait out the apocalypse.

The only other possibly comparable movie to this is Tropic Thunder.  That movie’s main satire was of big Hollywood productions and those who make them. The main gag at play here is the actors skewering each others’ public personas, and essentially being hilariously mocked, and doing the mocking. They are playing themselves, but at the same time, they aren’t. They’re playing heightened versions of themselves, where some of these character attributes are similar to their everyday selves, but some aren’t. Who could possibly envision the seemingly sweet and innocent Michael Cera as a drug-abusin’, obnoxious loud-mouth? No one could have, but it makes for a simply hilarious character.

That’s the thing about This is the End: it’s insanely funny. Ridiculous, yes, but a sure blast if there ever was one. Each of these characters poke fun at each other and the fun they’re having really shows. They invite us on the ride, and this viewing is truly fun. They make a sequel or two to their best movies (Pineapple Express), and decide not to make one for Your Highness. It’s all good old-fashioned, self-aware bliss. You’re going to love these guys.

This is one of the most effective comedy/horror sci-fi hybrids in some time. I love the balance of gross-out humour and gross-out horror. The premise is very original, and the humour is silly and immature, but the majority of this content will have you laughing and howling the whole way through. It’s quotable, brilliant, immature, and just plain fun. This is the funniest movie some of these guys have ever been in. They sling one-liners every which way, there are a few great startles and you’ll probably love every minute of this.

Though, the pacing is rough in the middle. One usually can’t expand on the traditional end of the world premise, but the writers know what they’re doing and so they give this superb execution. They run with what they know: comedy. The movie just works incredibly well. For the most part, it’s a thin story, but it is effective and admirably written. About 90% of the jokes hit, and the ones that don’t, are mostly said by Jay Baruchel. He’s from my hometown, but the guy isn’t incredibly funny. He has a few good lines, but they’re limited. This could be because he’s written as the straight man, however. There’s also so much product placement that makes this feel like one big commercial for all things Coca Cola, Milky Way, Nutella, and CT Crunch (I could go on, there’s about as much product placement as memorable quotes). This is easily forgiven because it’s set in a real-life celebrity culture. No one’s going to just own No Name brands, especially not rich people who star in movies.

One would expect that this wouldn’t have a huge emotional core. It does, surprisingly, have a better one than the average comedy. This is a buddy comedy of a bunch of guys making the best of their situation, the relationship between Seth and Jay, and the fact that all of these guys need to learn a thing or two about fate, redemption and – most of all – friendship. It isn’t as undeniably sweet as Seeking a Friend for the End of the World is, but I’d be fibbing if I didn’t at least get a few chills at one of the movie’s most effectively awesome, sort-of emotional- and so, so hilarious – moments near the end.

This just shows that a comedy about hanging out with one’s best buds could be a real gem to the genre. Adam Sandler could take quite a few pointers from this comedy. These characters are so easy to love, even Danny McBride who you’ll love to hate. This is one of the greatest ensembles ever assembled, at least for a critically acclaimed flick. It could be called “Comedians Assemble”. It’s one of the most quotable movies since The Hangover, and you’ll want an encore screening the second it’s over, mostly to just learn more quotes, because there are so many. I love all of the obvious nods to popular movies, as well. This is as absolute blast that combines so many favourite genres – comedy, sci-fi, horror… It’s like Neapolitan ice cream. There are more than a few surprises in this fantastic comedy treat.