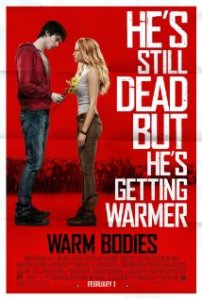 Finally, this gives both Zombieland and Twilight fans a chance to come together and watch a movie in peace!

Warm Bodies is told from the fresh point of view of a zombie, the highly unusual R (Nicholas Hoult), who goes around an airport, occasionally having almost conversations with his best zombie bud, M (Rob Corddry). Their zombie group runs into a human group ran by Perry (Dave Franco), boyfriend of the main girl, Julie (Teresa Palmer). After Perry gets killed, R is immediately attracted to Julie, and he brings her to his home in an abandoned airplane. They soon form a bond, R wants to become human again, Julie begins to change his heart for the better, and their relationship might just rattle the whole lifeless world as they know it.

One of the only similarities between this and Twilight is they are both Young Adult novels. The girl is also attracted to a supernatural sort-of being, even though zombies are the norm in the post-apocalyptic world they are living in. One thing that is hard to comprehend of this human-supernatural being relationships: Are these girls that desperate that they have to resort to the basically dead? As soon as one guy sparkles in the sunlight or puts on a little make-up, do they seriously immediately develop tendencies of a strange branch of necrophilia?

Anyway, the film is also romantic, and the similarities to Twilight basically stop there. This is a testament of human connection. Julie begins to teach R how to actually live, and because of this, he opens up to her and learns how not to be dead. He learns how to talk, and he learns how to feel and dream, something that is extremely unorthodox for a zombie. One thing that helps him be more human is this: In this specific world, when a zombie eats a victim’s brain (R keeps Perry’s as a snack food), they absorb their feelings and their memories; the little slide show of memories in their head is as close as they get to dreaming.

Speaking of those memory flashbacks, they give a chance to show visuals in the film. They aren’t very good, they come off as hypnotic and fairly headache-inducing. They’re a cool attempt, sure, but they’re hard to admire when one has to squint at the screen. One other thing that is irritating about the feature is that zombies only grunt, and cannot form words… So any huge fan of zombie flicks may be wanting to scream: “OH! THE HORROR! THIS ISN’T RIGHT! THE DEAD DON’T TALK!” The film may be altogether unrealistic, but it doesn’t stop it from being fun.

Other than Twilight, this film has similarities to over zombie flicks, like Zombieland. They are both quite funny, and this could be seen as the next best zombie date movie. One thing that is similar to TV’s The Walking Dead is the hiding the human scent trick, where zombie blood is smeared on humans. Also, this has many similarities to Shakespeare’s Romeo and Juliet, something that is evident in the characters’ names themselves. There is a balcony scene that mirrors that of the play, and that is the biggest similarity. The love is forbidden, even when R hopes it to be true. The two things getting in their way: Julie’s father, a military leader of the world named Grigio (John Malkovich); and Boneys, a skeleton being that all zombies eventually become. These are the two main conflicts, and, fortunately enough, they don’t make the film crowded or really distract from the story at hand. The Boneys actually add some real intensity to the feature, and they get one good scare, but they’re so CGI’d to a point of no scary return. If one of these guys came up to me in alley, I’d just look for a computer to unplug.

This isn’t a perfect feature because it doesn’t take full advantage of its fresh premise. It piles on a few predictable moments, but it still does an admirable job. If Jonathan Levine wasn’t behind this with directing and adapting the novel by Isaac Marion, it might not be the surprise hit turns out to be. I cannot compare the book to the film, but the laughs Jonathan Levine manages to generate are great. If you can find humour in R’s unique commentary of gaining human attributes and becoming a real boy, you’ll enjoy this a lot. If this zombie staring awkwardly at others is your type of comedy, you’ll be smiling like crazy. However, while Hoult generates a many yuks, and Palmer proves sexy enough to get this guy’s heart beating again, and Analeigh Tipton (Crazy, Stupid, Love.) generates a few laughs, Corddry gets the biggest laughs with hilarious one-liners.

In a nutshell: Warm Bodies proves to be 2013’s zombie date movie. It gives a fresh spin on the genre with it being narrated by the zombie (who comments things like, “Boy we move slow, this is going to take a while*”).Without a lot of solid competition, it also proves to be the one of the best films of the year. With a fine use of an ultra cool premise, this is a solid flick that could have been a little better. Maybe more Malkovich would make this astounding instead of just really good…

*They run when they attack, so I must ask… Why can’t they just fast-walk everywhere?