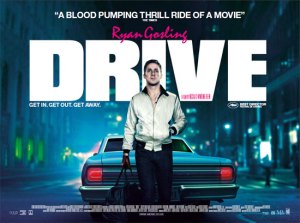 Tagline: Some Heroes are Real

A mysterious Hollywood stuntman, mechanic and getaway driver lands himself in trouble when he helps out his neighbour.

Drive is a hard film to place into one basket. It’s filled with crime, drama, mystery, suspense, and even some romance. There’s a great soundtrack that gives it an awesome retro vibe, and it also makes it have a great atmosphere. The pacing is slower-than-usual, but it just builds great suspense all the way with talking, where it just turns from a cool love story into a crime-filled adrenaline rush.

There’s a lot of shock value within this film. The Driver is a really interesting character that is sort of the anti-hero, but he’s also just a man who’s trying to help out a few people at once. The viewer might really feel sympathy for the guy because he’s just trying his hardest to help out Mulligan’s character, and in quite a few scenes – the high amount of violence that is shown really expresses her innocence. One scene, her shock of this violence really mirrors what the audience may be feeling. He’s a man of little words, so that may make a minority of audiences not like him. Some people just prefer dialogue, I guess…

It really is a film that one may either love or hate. Some of the concepts within the film have been done before, so a lot are just homages. However, with the retro soundtrack and the amazing atmosphere, it feels really unique.

Drive offers one of the finest experiences, and atmospheres, of 2011. It’s a superb cinematic achievement that will be talked of for years.