I know, I know, some of you may be thinking: But TV movies aren’t even real films! I’m going to review them anyway.

Terry is a fine TV film.

The film is well-paced and raises more awareness for his [Terry’s] accomplishments, and is a great flick that Canadians, and other people of other nations, can enjoy. It’s great to watch around this time of year because it’s around the Terry Fox Run, and just reminds us all of what he has done throughout his life.

Some of it isn’t all that entertaining, but this makes for a really interesting watch. The supporting characters are pretty good, despite having the potential to get on my nerves at the odd spot in the film. The supporting character that got on my nerves the most was Terry’s Mother, because she was just so discouraging to him. It’s obvious where she’s coming from because she doesn’t want to almost lose her son all over again. 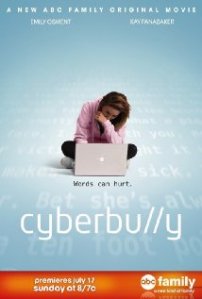 Taylor Hillridge is a fairly well-liked average girl at her local high school, and she has a solid group of friends. She is sometimes bullied by a group of “popular” females at her school, but that’s just kids’ play compared to what comes next. For her seventeenth birthday, she gets a laptop and she soon signs up for a popular social networking website. Taylor soon gets ostracized by her friends because of the cruel rumours being spread about her, and she soon became a victim of extreme cyber bullying.

Cyberbully is a television film that knows its purpose, and doesn’t aspire to be anything more than a film that raises awareness of the effects of cyber bullying, and bullying in general.

There are a lot of unlikable characters, but they’re necessary. Some of the characters are there to bully, and others to just cause more and more conflict. Though, the character of Taylor can be relatable to young teens and children around the world, because she feels hated and uncared for.

It’s a story that is easily relatable to those who have been previously bullied. It’s a nice story of people trying to forgive, and the story raises more awareness for the general problem and it shows that there is help for it.

Emily Osment has also shown us that she actually has some pretty stellar acting abilities. This film might as well be a statement for her to say, “I’m a former Family channel star, but I’m not disappearing from acting anytime soon.”

The story is pretty good, the pacing is a little off in areas and it isn’t all that entertaining, but it’s a fairly interesting television film experience, that also really isn’t that time-consuming.

The supporting cast also delivers fine performances, especially Kay Panabaker. Actually, that’s the only other notable performance I can think of.

Cyberbully knows its purpose, and it is a fine television drama. It has an okay plot and okay pacing, but a nice central performance. I wouldn’t pursue to watch it again, but it offers a nice, and interesting experience.