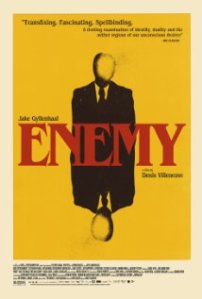 You should really see Enemy with a friend. At least do yourself a favour and have a designated discussion partner to talk about the film. If you think too hard and try to figure out this puzzle of a film by yourself, you might find it to be a bigger challenge. The film follows Adam Bell (Jake Gyllenhaal), a bored and highly disinterested history professor at a university in Toronto. He can’t even get himself intensely interested in his beautiful girlfriend Mary (Laurent). One day he rents a film based on the recommendation of a colleague. In the background of one scene, he spots a person that looks exactly like him; an actor named Anthony Clair, also portrayed by Gyllenhaal. Bell decides to seek out his “double,” which put of their lives on a collision course.

In some of Bell’s lectures, he talks of dictatorships and how some use a lack of education to limit individuality – and, to a further extent, power over our actions. He also speaks of repetition. The first time something happens, it’s a tragedy; the second time it happens, it’s a farce. It’s a thought-provoking idea to ponder. It’s one of the many ideas the film proposes. The thematic duality is also enjoyable. I think the idea of a doppelganger is a fascinating one. It’s a concept delved into by many cultures. Spanish writer Javier Gullón adapts José Saramago’s 2002 novel called “The Double.” I’m not sure how faithful this film is to the novel, but Denis Villeneuve (director of the phenomenal Prisoners) tells the story with surrealist imagery, which he utilizes to great effect. This film is a dream come true for any fan of surrealism.

Not one image of Villeneuve’s style is not arbitrary, even though it might seem it at the time. It contributes to the story in some way, even if you forget the image by the end of it all – and have to watch this again. Granted, at the time, some images might strike viewers as empty and meaningless. Villeneuve realistically captures the urges and tendencies of men, as well. Some paths he takes are dark and ominous, which sets the tone and atmosphere for the film. It’s a movie that proves the unexpected is so damn satisfying. If I were the filmmaker here, I’d probably just take the route of finding my doppelganger so I could play jokes on my friends. That would be a much shorter film than the engaging, intricately written 90 minutes at hand, that actually goes by fairly quickly. At times the film is sexy, unsettling, violating, haunting and all too memorable.

Denis Villeneuve truly knows how to absorb his audience’s attention. With blending imagery of something like a Darren Aronofsky film (at times I was reminded of Black Swan), and a scope and atmospheres that remind me of some of David Fincher’s films, he is able to create a unique visual style and an enthralling mystery. His fascination with creepy crawlies makes an appearance in symbolism. The film all-around fascinates. Sometimes viewers may not be able to make heads or tails of things that occur on-screen – at least in first viewing – but I willingly went along for the ride. Even if surrealism isn’t your favourite thing in the world, you’ll probably be able to appreciate what Villeneuve sets out achieve. Some symbolism could have a stronger focus, granted, but ambiguity is intentional at times. The intention is to provoke thoughts and discussion – and it’s done so in spades.

I cannot end this review without mentioning the phenomenal work from the cast. At times the women take a back seat to the Toronto landscapes and imagery. That is mostly Laurent as Mary, who is largely unbeknownst to Adam’s mission to find his double. She does great for what she is asked to do. Sarah Gadon’s character of Helen is in the thick of the plot and I think she has an interesting role. Jake Gyllenhaal delivers a tour de force performance. He is up to the challenge of portraying these two very different characters. One is a timid, often distant character; the other a confident, intense and tempted character trying to figure out this whole mindf!#k of a situation. Join the club, Gyllenhaal number two. The character is driven by these two, and the one strong actor, who play with individuality and duality.

Warning: Try not to focus on just one, sole concept. Viewers with an attention to detail will benefit from that greatly. Villeneuve creates an intelligent and spellbinding experience with Enemy. He compels viewers from the beginning, to the final, absolutely haunting image. Good luck trying to forget that image. It’s what helps this become so memorable – and what is helping Villeneuve become one of Canada’s most exciting filmmakers.