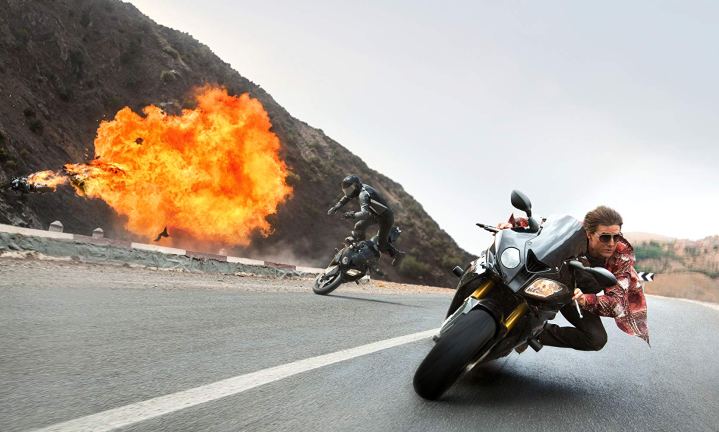 I think his sense of humour is one of the reasons this entry has so many funny moments, and another reason is Simon Pegg getting a bigger role as Benji, who’s been newly promoted to field agent. Bird’s humour is shown when Ethan Hunt (Tom Cruise) gets a mission to find files identifying a person of interest called “Cobalt,” from the Moscow Kremlin archives.

It’s the usual when Ethan gets the message, but the phone says it’s going to self destruct but it doesn’t, so Ethan goes back and hits it with his hand.

The plot itself is good as “Ghost Protocol” is put in place by the President that disavows the entire IMF team because Ethan and his team, including Benji and Jane Carter (Paula Patton), are implicated in the bombing at the Kremlin. Also helping them is intelligence analyst William Brandt (Jeremy Renner), and his character’s super interesting. The villain played by Michael Nyqvist is good.

The action’s thrilling, too, especially the stunt outside of the world’s tallest building, Dubai’s Burj Khalif. The film’s prison break at the beginning is also such a great opening.

Ethan and team take on their most impossible mission yet, eradicating the Syndicate – an International rogue organization as highly skilled as they are, committed to destroying the IMF.

The idea of a shadow organization like the IMF is such a cool idea. It’s awesome watching Ethan try to take them down, and there are a lot of cool plot twists throughout.

Solomon Lane (Sean Harris) is also a good villain, and his speaking voice is so damn cool. New character Isla Faust (Rebecca Ferguson) has a great dynamic with Hunt, and she keeps us guessing throughout.

Mission: Impossible – Rogue Nation is just so bonkers it starts with Tom Cruise hanging off an airplane. It’s one of the best stunts but the film is very entertaining. The film’s set pieces really continue to astound, especially the car chases. One notable scene at an opera makes the opera look like a lot of fun, so that’s a mission it also accomplishes.