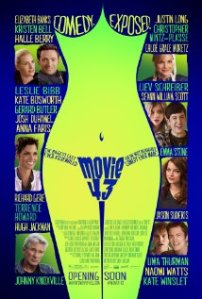 I just watched a version online, and I believe it was the version released in the U.K.; it’s an alternate plot to the U.S. version that doesn’t have Dennis Quaid pitching crazy ideas to a studio. I was not going to spend money on this.

Movie 43 is a haphazardly edited sketch comedy that stars as many A-list actors (including Emma Stone, Richard Gere, Kate Bosworth, Liev Schreiber, Naomi Watts, Justin Long, Kristen Bell, and Elizabeth Banks, to name a few) as the filmmakers could convince that this movie would be lots of fun to make. Charles Wessler achieves his vision: A satire that brings up common issues in the most offensive of ways, and it is the most outrageous comedy ever made.

But it is also one awful movie. If only his passion project (an idea that he’s had for over a decade) wasn’t so silly. Saturday Night Live has okay sketches, good sketches and those rare great sketches. This, however, has awful sketches, bad sketches, and just tolerable, but kind-of funny sketches. Even if you do laugh at some points, it doesn’t stop this from being one bad, bad film. This is still sort-of imaginative and quite original, and unlike anything you’ve seen at the movie theatre before. It’s one of those times where too many cooks in the kitchen (13 directors, a huge cast, 30 writers) really spoils the broth. Apparently, it takes thirteen directors, 102 credited cast members and thirty writers to make a really bad film.

The plot follows three adolescent boys who are searching the depths of the internet for Movie 43, the world’s most banned feature. The two older teens who tell a younger brother, the incredibly irritating Baxter who looks like he’s really ten years old, about Movie 43 are really just making it up because they want some April Fool’s revenge. Little do they know is that the video could very well end the world, somehow.

That makes absolutely no sense whatsoever, nor is it explained. It’s completely random and idiotic. This backstory manages to be worse than some of the comedy sketches, to a point where you might actually want to see another bad sketch. This is because the actors in the background story have little to no charisma, and they’re increasingly annoying and bland.

While the idea of sketch comedies in movies is fairly new, this is still trash. The plot is almost as disorganized as every spoof movie out there. If this is compared to Scary Movie 5, this might as well be an Oscar contender. This is definitely not for the easily offended. The humour is thoroughly crude, offensive, absurd, violent, vulgar, inane, insane, sophomoric and rarely funny; but it’s ironic that I’ve seen a lot more nudity in less offensive films. So… Humour that will offend almost the entire world is okay, but extreme nudity is off the table? Hmm.

Out of the movie’s thirteen comedy sketches, there are thirteen stupid and fairly offensive ones. The one with Terrence Howard is hardly funny at all. The sketch showing that people get much too angry with machines and it upsets the kids inside the machines is incredibly stupid, but it’s creative. There are arguably five tolerable ones, but there are none that provide consistent laughs. The ‘Super Hero Dating’ segment with Jason Sudeikis and Justin Long has a few solid jokes, and it’s an imaginative look into the culture of super hero impersonators. It’s the movie’s strongest segment (even if it’s hardly great). The ‘Happy Birthday’ segment with Seann William Scott and Johnny Knoxville also has some good laughs (albeit forgettable), but it is one of the movie’s more violent and vulgar segments. The ‘Truth or Dare’ segment starring Stephen Merchant and Halle Berry is funny in the beginning, but it progressively gets worse until it falls on its face. Suffice to say, the ‘Happy Birthday’ and ‘Super Hero Dating’ sketches are my favourite, and they are somewhat entertaining.

SPOILERS FOLLOW IN THIS FUNNY PARAGRAPH, I briefly describe the film’s worst three sketches. It seems as if the movie is designed to have the worst three sketches at the beginning of the film. The first sketch has Hugh Jackman sporting a pair of testicles under his chin and it is unfunny and unwatchable. It’s a one-joke sketch where it seems as if Kate Winslet’s character is the only one to notice the prominent nuts. Though, it does show that society cannot help but judge someone for the way they look. The second sketch features Liev Schreiber and Naomi Watts homeschooling their child and mercilessly bullying him to a point where he will definitely need to be institutionalized. The third sketch features Anna Farris requesting Chris Pratt to poop on her (you read that right) because it’s apparently a big step in a relationship. Apparently, it’s okay to poop on women, but it’s frowned upon to sh*t on them. Because if you shit on a gal, it’s deemed very offensive. (Read the next part very sarcastically.) Wow. This is the world of my dreams. I’ve always wanted to live in a world where the norm is to poop on women and have a pair of testicles dangling under my chin. Oh, someone, take me there! I can’t take this society where women bitch about me even farting in their general direction! END OF SPOILERS.

Alas, this movie is awful. (But, I am able to use the word ‘alas’ in one of my reviews.) I’ve seen much worse, but it’s really, really, really, stupid. The laughs are forgettable; but it’s the disturbing sketches that are unforgettable. Much to my dismay, this stuff kind-of just sticks with you… Forever.