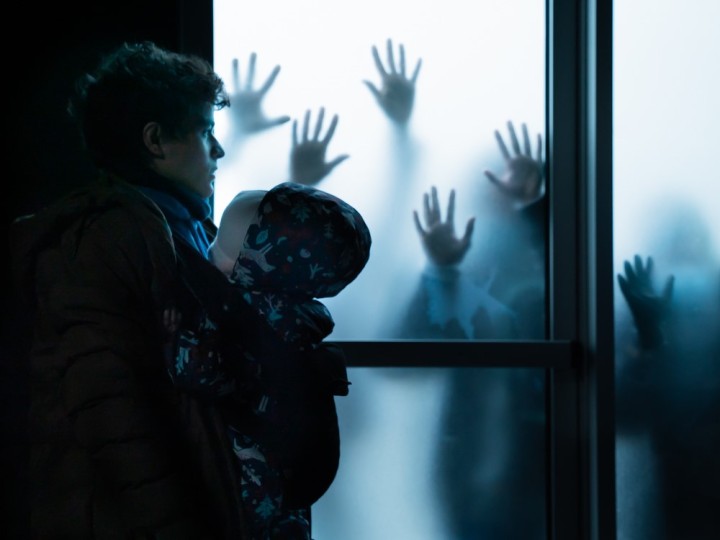 I love zombie films that feel unique, both visually and with its sharp commentary. That’s the case with Julien Knafo’s Brain Freeze, which just opened the Fantasia Film Festival as its Opening Night film. It’s a fun, gory film, even if it’s gory in a different way.

These zombies can still be killed by going for the brain, but their blood is green instead of red, and it looks neat. One of the film’s best set pieces, too, features a mutated zombie in a green pool. There’s no gore here, but the grass growing from his mouth and the design of the moss is chilling. The infections start by drinking from a poisoned water supply; and eventually turn you into gross when you’re dead.

You see, on Quebec’s wealthy Peacock Island, the water supply has inadvertently been poisoned. A company called Biotech M showers the wealthy golf club’s grass with fertilizer so the wealthy snobs can golf all year-round. All could be avoided if they simply they indulged in indoor golf simulators, but as the golf course’s owner, Marcel (Louis-Georges Girard), puts it, “Golf isn’t just a game or sport, it’s social status.”

As for the film’s commentary and how writer-director Julien Knafo uses the zombie genre to his advantage is showing that the wealthy think they can manipulate everything with money, even nature; but nature has different plans. As we destroy Earth, it fights back here in visually memorable ways through the infected. Commentary also comes in the way of the government’s mismanagement of the situation; permanently “closing” the bridge between Peacock Island and mainland Quebec.

As outsiders looking in attempt to make sense of what’s happening on the island, we get that voice through radio host Patrick Nault (Simon-Olivier Fecteau), who believes the infection should be “amputated” should it mean saving the rest of Canada. His sentiment is they’re just rich snobs, anyway. He chats with concerned Quebecers, as well as government heads handling the situation, like Minister of Public Security Daniel Beauregard (Jean Pierre Bergeron), who simply wants credit for the positives of avoiding a larger disaster (very reminiscent of our age, right?). “Know nothing, do nothing, that’s our policy,” he says. “It’s why people voted for us.”

As for the action of the film, the horror’s well-shot and there’s a lot of great humour infused. The emphasis is more on “entertainment” because there’s not a lot of the traditional beheadings in zombie films, so it feels more like a comedy-thriller than anything terrifying. It’s the comedy of Brain Freeze that is great, especially when we encounter the first mob infected at the golf course. The course’s owner and a Biotech M rep, Michel (Stéphane Crête) hole up in the front lobby of the clubhouse. Zombies clamor to get in and Michel goes, “Do you think they want to unionize?”

These side characters are good fun. That’s the case, too, with the first poor sap we see gulp down a glass of tap water. We see him develop blackish-blue teeth because of the fertilizer, and then get very green eyes (part of the fun visuals). Much like 2003’s Cabin Fever, this is another film that will make you nervous to drink water. The way Joey Kern’s character nearly survives that film by just drinking beer, the survival of our three main characters – teen Andre (Iani Bédard) and his baby sister Annie (Claire Ledru), as well as local security officer Dan (Roy Dupuis) – their survival insists on avoiding water. Early, there’s an emphasis that Andre only drinks Coca Cola.

These main characters are lively, and some of the film’s biggest laughs come from Annie’s expressive reactions to big moments. It’s nice when young kids can leave an impression of a film, instead of just feeling like a MacGuffin (Shadow in the Cloud) or a nuisance or “story device” (think A Quiet Place for that one). I enjoyed the dialogue between Andre and Dan, where their relationship is always entertaining and believable. They go from one situation to the next, trying to figure out a way off the island or at least to survive, and that keeps the pacing brisk. Other elements add a lot of interest, too, especially in the third act.

As a character, Dan is great helping the pair of kids survive. He’s emotionally connected to his daughter Patricia (Marianne Fortier), who tags along throughout the film and develops Dan in strong ways. I love one part of his character when he’s attacked by a small zombie girl and doesn’t kill her. “That’s somebody’s daughter,” he says to Andre when he questions him. He’s almost convinced, too, that there is a way back from this infection.

It’s this compassion that has a lot of the heart in Julien Knafo’s Brain Freeze. I liked one moment, too, where Dan tries to start a fire (the reason he hilariously only has one good eyebrow). It’s an elegant way to show his aversion to technology, or at least his understanding that one needs to adapt. At one point, he tries to start a fire and Andre comes along and starts it with a blow torch.

It’s a teaching moment instead of a comedic one. “There won’t always be modern conveniences,” says Dan. He understands certain things won’t always be on our side. As shown by Brain Freeze, even sometimes nature goes against us since we’ve gone against it for so long, as these characters are threatened to turn into part of nature. That’s one of the most intriguing elements of Knafo’s zombie comedy thriller. Fantasia’s off to a fun start with this one.

Brain Freeze had its World Premiere at the 25th edition of the Fantasia Film Festival as the Opening Night film. For Canadian fans, you can buy tickets for its encore online screening at 7:30 p.m. on Monday, August 9. Find tickets here.