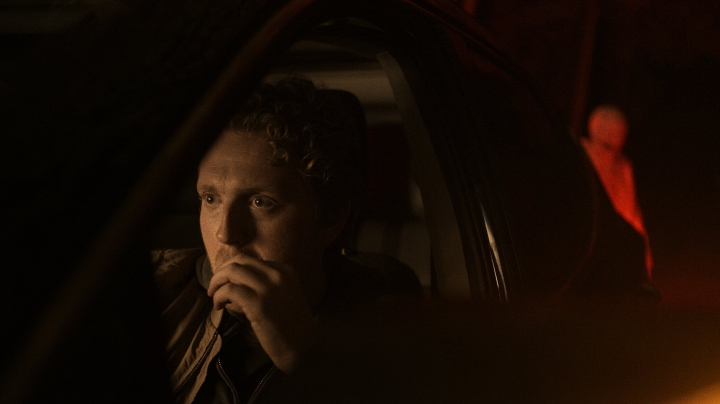 For this episode of The Filmcraziest Show, I was able to chat with the two stars of the new psychological horror film The Toll, as I spoke with actress Jordan Hayes (who plays Cami) and Max Topplin (who plays Spencer). The film is a psychological horror film where Cami gets in a rideshare with a socially awkward driver, Spencer, and when they take a wrong turn, they find themselves being stalked by a malicious, unseen evil. The film is directed by Michael Nader.

In this conversation, we chat about filming in the car, what it was like being producers on the film and juggling that role with performing, as well as playing to the dynamic of the characters as there’s elevated anxiety and standoffish aspects of their character dynamics, and the challenge to playing that when Hayes and Topplin are real-life best friends.

Daniel Prinn, FIlmcraziest: As well as co-leading the film, what was it like being producers on this project?

Jordan Hayes: It was a lot of work. It was a huge undertaking for Max and I just because of the nature of how it all came together and how quickly it came together. But it was great, we were lucky enough to have another producer as well, [William Day] Frank who was great. We just both really fell in love with the script and trusted our director Michael Nader, so it was easier than it could have been.

Max Topplin: One thing I’ll add to that is, producing and starring in a film, if this were any other genre of film where we had to look like we weren’t up all night, absolutely out of our minds like murderous insane people, then it would not have worked because we were shooting all night.

We would wrap around 8 a.m. and Jordan and I would have to start the producing day, make sure all our vendors were paid, make sure we had all our of equipment, dealing with our unions. Whatever the case was, we had to do it during the day and shoot during the night. It became a pretty vicious cycle of lack of sleep, and I think that played into the performances, to be honest with you.

Filmcraziest: Also, if you had an estimate, how long did you film in the van for?

Jordan Hayes: I think we pretty much block shot everything in the car was… Maybe five days, eh Max?

Filmcraziest: That’s a good amount in a car. [laughs]

Max Topplin: Michael Nader, the director, one of his keys going into it was claustrophobia. And the idea of being trapped inside this vehicle with a complete stranger and kind-of questioning this rideshare and this new technology and how we interact with it. It really got us excited from Day One and I think he captured that claustrophobia quite well.

Filmcraziest: Yeah, just with that anxiety of not knowing who your driver is or who your passenger is, what was it like playing into that dynamic?

Jordan Hayes: I think it’s something that’s pretty relatable. I think everyone’s been in a rideshare where they kind-of question their driver at least for a second. Especially some young women it might be a more relatable thing for them. Like Max said, it was an interesting topical subject to be able to dive into. I guess from Max’s perspective, you were the driver questioning me. But you never get into Uber’s, either, so you don’t know. [laughs]

Max Topplin: Yeah, so I can’t tell, but that was a new concept to me that I was very interested by, that the driver would be the one feeling a bit nervous about the situation. I guess when you look at cab robberies, when you look at assaults that have taken place in a conventional taxi or a rideshare, it goes both ways. That was eye-opening. Obviously the numbers and the statistics make it seem like the passenger is in more danger than the driver, but it was interesting to think, “Okay, maybe the driver has legitimate fear in this action, as well.”

The Toll was released in theatres, On Demand and on Digital on Friday, March 26.

For the audio version of this conversation, I’ve included it directly below (or click here if you want to download it).