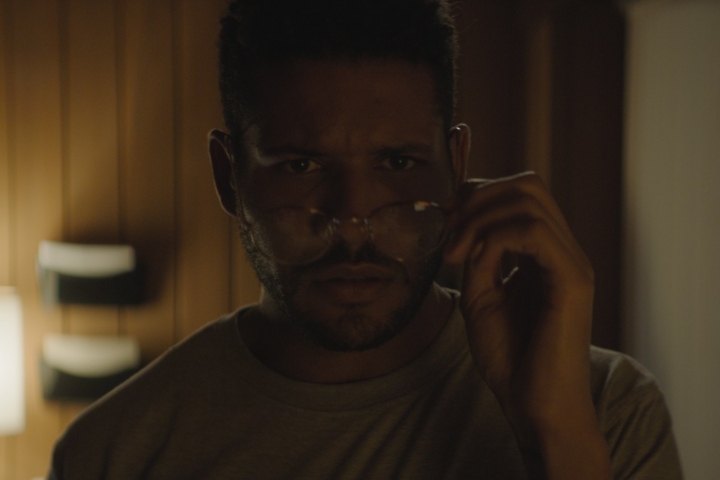 Malik (Jeffrey Bowyer-Chapman) and Aaron (Ari Cohen) are a same sex-couple who move to a small town from Chicago with Kayla (Jennifer Laporte), Aaron’s daughter from his first marriage. They hope by moving to a small town they can raise Kayla better, and not see as much hatred.

Soon after moving in, strange things happen as someone breaks into their home and spray paint a derogatory term on the wall. Malik doesn’t tell Aaron about this to protect his feelings, but when Malik starts having concerns about their neighbours – including Marshall (a solid Lochlyn Munro) and Tiffany (Chandra West) – Aaron just thinks he’s being paranoid due to his past trauma.

The film’s set in 1995 and this trauma is set 12 years prior when he witnesses a brutal hate crime of his then boyfriend. That’s unfolds throughout the film as it’s the centre of Malik’s development, and it gives his character the most layers out of anyone here. The heart of Spiral is using the oppression and hate crimes of the LGBTQ+ community as the set-up for the film, which is a great idea for this film that borders somewhere between psychological thriller and psychological horror.

Writers Colin Minihan and John Poliquin make us question throughout if the persecution and bigotry is legitimate, or if Malik really is being paranoid. With some of the imagery and use of symbolism (the constant spirals Malik sees throughout) it seems apparent that it’s setting up for something occult, but I won’t tell what happens. Jeffrey Bowyer-Chapman handles the trauma of Malik well and he compels during the film. He has a good chemistry with screen partner Ari Cohen because of some solid cutesy dialogue. The writing and direction makes this film bizarre and intriguing enough to hold interest.

Kurtis David Harder is hit or miss directing the horror-heavy moments, either only slightly missing the mark and when he misses it’s because it only slightly misses the mark, but when he hits, it hits. Some of the misses are anti-climactic scares like when we see a branch knock menacingly on a window; and there’s also a scene with a man walking menacingly on a bridge that could be so much better. He’s on the other side of the bridge from the characters, so there are no real stakes or tension in this scene.

Harder does have some great moments, where a lot of the fear comes from waiting for something to happen, and it’s effective, especially a moment where the music cuts out before the height of a scare. Outside of the scares, Harder has some great direction, especially a shot where Malik sees that derogatory term towards homosexuals and we only see the beginning and end of the word because Malik’s body is blocking the middle letters is brilliant.

About the screenplay, Malik’s investigation into what’s going on feels too convenient. This is especially when he jogs past an abandoned house and decides to return in the middle of the night to investigate. It makes for a creepy sequence and he finds answers, but it’s a writing choice to advance the story instead of a Malik believably making this decision on his own. It feels too random.

There are great ideas in Spiral with the oppression and how these ideas expressed. This is namely as Malik works while he works on a writing project and the man he’s researching drops lines like “the traditional family unit is everything.” Though, the screenplay doesn’t challenge enough in these moments, as they have Malik jog and think about them internally and flash his trauma. The film scratches the surface and doesn’t go deep enough, really making the audience think about it themselves with prompts like Malik saying “people don’t change, they just get better at hiding how they feel.”

It’s impressive how this all still feels relevant today, and impressive how it depicts the sense of isolation Malik feels. I just wanted a stronger story to express it. Kurtis David Harder produces interesting stories (namely Harpoon and Knuckleball) and this is an interesting story that could be executed better. In structure, near the end of the film where clarity should be offered, it instead gets more confusing. It started to Spiral out of control, and then won me over again with a great last 15 minutes. If this had let the audience in on its secrets sooner, I think the entire third act would compel.