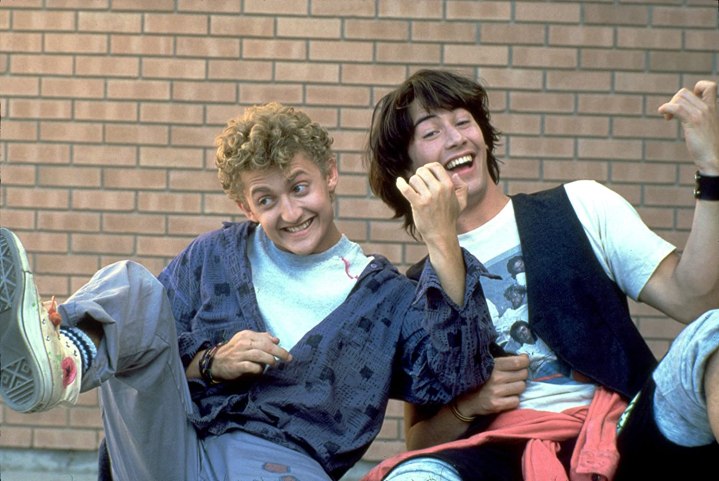 I watched Bill and Ted’s Excellent Adventure for the first time in 2016 or 2017 (double checked on my Letterboxd, and I logged my first watch of this film on Feb. 18, 2016) and while I enjoyed it, I didn’t think much of it. On my first re-watch of it, I knew just to turn off my brain and vibe with the righteousness of it as a slacker kind-of comedy with time travel.

And I loved it this time because Keanu Reeves and Alex Winter are such a good pair. I was laughing a lot, especially at the simple comedic moments like when Bill (Winter) and Ted (Reeves) just look at each other and smile or do their electric guitar bit. These characters are just hilariously stupid, and I think one of my favourite moments is with Bill’s stepmom, Missy (Amy Stoch), where she and Bill’s dad are about to have sex and Ted makes fun of that and Bill just tells him to shut up multiple times and Ted just stops and smiles. It’s a small moment, but I think it’s so great because he’s so dumb. I love their time travel “guide,” Rufus (George Carlin), too, and him introducing them to time travel is amusing.

The story works so well, too. It’s a kind-of Mr. Peabody and Sherman plot, where they go through time to bring historical figures back to San Dimas for a history project, that’s simple and effective and it makes history a lot of fun. These historical figures steal the show, especially at the mall and especially Napoleon Bonaparte (Terry Camilleri) at the water park which is so great. The ending is very theatrical, too. I’m also very entertained by the idea that these two knuckleheads are the future, and their charm is just what makes this film work so well.

Now, when I said I just liked the first Bill and Ted, I didn’t like it enough to immediately seek out this sequel, Bill and Ted’s Bogus Journey. This one doesn’t focus so much on time travel for the Bill and Ted, but is very much present for the hook of the story as exact replicas of Bill (Alex Winter) and Ted (Keanu Reeves) are sent back in time to Bill and Ted’s present to kill them. They refer to themselves as Evil Bill and Evil Ted. They’re sent back by a main antagonist, De Nomolos (Joss Ackland).

I didn’t love this film from the start, but when the original Bill and Ted are killed by the robots, the main plot of the film is Bill and Ted trying to figure out a way back to life and I thought this film was very funny from that point on, especially when they possess Ted’s father, Captain Logan (Hal Landon Jr.) and watching Landon Jr. play that version of Ted is one of the funniest scenes in this film. It really won me over when William Sadler’s Grim Reaper comes into play and they want him to take them back up to Earth. They challenge him to a set of games in a scene very much inspired by The Seventh Seal, which is so funny when he keeps wanting to play more games so he doesn’t have to bring them up.

Sadler steals the show here and so many of his scenes are great, especially one in Heaven. I also really enjoy some throwbacks to the first film.

I watched the first two films because of the new sequel that just recently came out. In Bill & Ted Face the Music, Bill (Alex Winter) and Ted (Keanu Reeves) are now middle-aged and still haven’t written the song that will unite the world. This film goes back to the original film’s roots as a more traditional time travel adventure, as Bill and Ted go through time to visit different versions of themselves to try to see where in time they write the song that will unite the world. The stakes are raised here because they have to save the world with a concert that very evening. There are also stakes because there’s a chance they could lose their wives – Elizabeth (Erinn Hayes) and Joanna (Jayma Mays) – the princesses they met in the Medieval Times in the first film.

There are aspects I really enjoyed about Bill & Ted Face the Music. I loved many of the different versions of the Bill and Ted’s in the future, and the creativity in the writing by Chris Matheson and Ed Solomon, who have written each film and have cameos in each one, as well. I also had a lot of fun with the return of William Sadler’s Grim Reaper, which is spoiled in the trailer so I’m spoiling it here. There’s an aspect here of Bill and Ted coming to terms with their middle age, something that was attempted as well with the awful reboot Jay and Silent Bob Reboot, but that aspect of the film is handled well here as they’re washed up.

The film also understands that some things that Alex Winter and Keanu Reeves did as young adults in the first two films, they can’t do as much here, like the little electric guitar moments and just leaning back and smiling at each other. It doesn’t work when they’re this old; though the one electric guitar moment Bill, Ted and Grim Reaper do is my favourite moment of the film because it feels like so much like the original. My favourite parts of these films are those small moments when they just do the air guitar riffs and smile stupidly, so less of that made this film not work as well for me.

That’s compensated for with their daughters, however, with Bill’s daughter Thea (Samara Weaving) and Ted’s daughter Billie (Brigette Lundy-Paine). They take on the really ditzy, dumb roles of Bill and Ted in the original film and their performances are great as they handle that side of the film that brings some of that goofier humour.

They also go on their time travel adventure looking for musicians throughout time to put on a kickass concert in order to save the world. This aspect is really, fun, too, and the way it’s written that the torch is being passed down to the daughters is effective and heartwarming. Another next generation is brought into this film with Kristen Schaal as Rufus’ daughter Kelly.

Her defense of Bill and Ted is nice as her mother, The Great Leader (Holland Taylor), doesn’t have faith in them and sends  a robot named Dennis (Anthony Carrigan) to kill them in the case that they can’t write the song in time to save their world. Dennis steals a bunch of scenes, especially when he becomes suicidal because he doesn’t think he’s doing a good job.

I enjoyed a lot of this film but I don’t have any need to watch it again. It’s just a ray of positivity that the world needs right now that is fun in the right moments and had me smiling throughout, and there a couple of good chuckles, too. I think what sets the first two films apart from this long-delayed sequel, though, is the fact that there are not that many belly laughs here. It’s an amusing film but I never found it consistently funny. It is consistently fun and charming watching these characters again as it recaptures the spirit of the original, but it would be a helluva lot better had it brought bigger laughs.