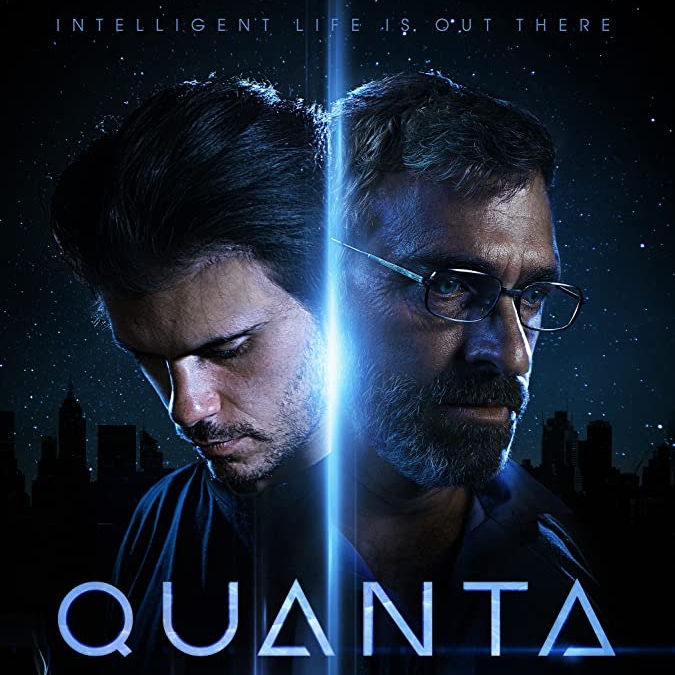 (In case you missed it, my review with the Nathan Dalton, the director of this film, can be found here.)

Though made on a small budget, the science fiction film Quanta always looks polished with its cinematography (by Samuel Baulch) and direction by Nathan Dalton. The film depicts an important research project. George West (Mark Redpath) is a physicist whose life-long work has to do with dark matter, and when he’s hired by a new university, they team him up with a gifted young assistant named Tom (Antony Talia). When they make a huge breakthrough, their egos start to clash.

I’m not certain of the target audience for this film, perhaps those with a love for science or an understanding of physics, but I’m not in that target audience. I can’t completely wrap my head around some of these concepts so I feel like someone at a party listening to an explanation, just nodding my head, understanding the gist of it but not grasping everything. Even with my limited understanding, Nathan Dalton makes the science accessible enough to get by. I wouldn’t be able to explain this to anyone else; but Dalton knows what he’s talking about, and the characters do, too. Granted, dark matter could be passed off as a different concept entirely and I’d keep nodding along, assuming it’s accurate.

I was more interested in the signal the characters receive from space than specifically the dark matter, and it’s intriguing how they eventually use the information from the signal. When we learn of some of the side effects from the information, the film turns into a lite thriller in the third act, straying from the straightforward science-fiction drama lane it stays in for most of the film. This is when the science is at its most far-fetched, but the realism doesn’t matter when this is the most intriguing part of the film.

It’s entertaining and the change-of-pace is welcome, as the film is slow as some discussions are boring for someone like me who doesn’t love dark matter. One thing I did like, though, was the intellectual property aspect of the film as George brings it to a new university but the IP doesn’t belong to him. That brings in a legal aspect and an antagonist to the film in Paul (Phillip Hayden), a character who represents the company that owns the IP. He feels like a minor antagonist because the core conflict comes from the personality clashes between George and Tom.

George wants to keep it quiet (partly because of the IP issue) and Tom wants to share it all over the internet. This personality clash is the beating heart of the film, and I think one’s enjoyment of the film rests on how much you believe and enjoy this dynamic. I liked the dynamic because of the realistic performances, and I found these moments to be the source of the film’s best drama.

There’s a similar beat of “hey mate, we going to tell anyone about it today?” and “not today, mate” (not word for word, by the way) is repeated a couple times throughout. This is because Tom doesn’t listen and keeps trying to share the breakthrough. He has the ego the size of a planet and while he seems like a good guy trying his best, there’s an emotional disconnect between him and the audience that keeps Tom from being as relatable as George.

I liked George because of the layers to the character. His need for creating a legacy for himself and being remembered is so relatable, and it also makes his protective instincts over his work make more sense and hold more emotional weight. His past work makes him feel like a failure and it pushes him to be better, which I liked.

The aspect of legacy within Quanta is the most interesting thing about it because it’s what makes the screenplay and the characters tick. George cares about his leaving his mark and doing something very important for science; while Tom just wants the recognition and the glory behind it. I think their standoffish chemistry worked for the film, and I enjoyed the mutual respect that grew between them and the sacrifices George had to make.

Both performances as these characters were solid because they feel realistic. They’re both grounded and Antony Talia as Tom is zanier, as he’s asked to be a bit awkward and throw in many vacant stares. His character brings some dry Australian humour to the film which, since Tom can be a bit robotic at times, is welcome as it makes him feel more human.

An example of this humour is when Tom’s girlfriend Alicia (Candice Leask) asks him where he was last night and he keeps repeating that “Einstein was wrong” in response. Alicia is very much a side player here as the supporting characters don’t hold much weight in the story. The only person Alicia talks to besides Tom is when she visits George at work, but they have so little do with each other these two visits feel random. She seems to be telling George that Tom actually does respect him, and it’s also possible she’s trying to find someone to confide in or bond with someone about how weird Tom is, but these scenes are too brief to tell for certain.