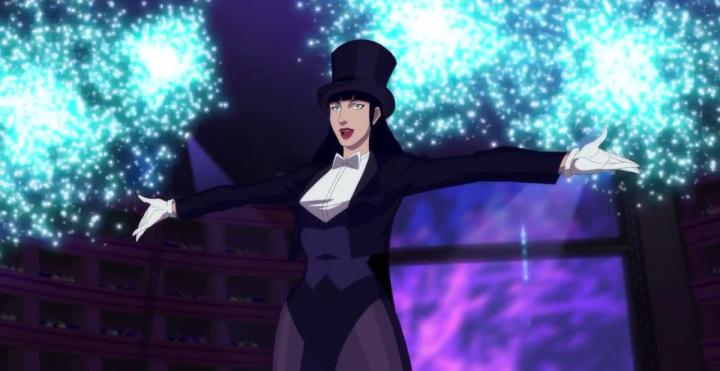 The film opens with average people committing acts of violence because they see other people as demons, starting with a woman who runs over a bunch of them in the middle of a street, and my main question was why so many people were in the middle of the street. The Justice League don’t know what to make of it and Batman (Jason O’Mara), who is the only original JL member prominent throughout the film, is led to Constantine because whatever villainous plot is afoot deals with dark magic.

I don’t really love these DC Animated Movies (this film is a part of the DC Animated Movie Universe), but I think they’re always fine for their fans. I liked the premise of this one, though, because I think it gives something different than just the standard Justice League bit with the introduction of demons, but it still never got going for me.

Constantine’s introduction at a poker game in Vegas was a high point as Etrigan came out to save the day when Constantine forced Jason to summon him, as the situation escalated. Constantine never really left much of an impression after that because I didn’t think he ever did anything that interesting, but I like the character in the live-action film Constantine. I was way more interested in the world this film created, with the mythical House of Mystery and all that.

I found the side characters more interesting, too, like Zatanna who is a powerful magician and has something they call true magic (which Constantine also has), as well as Jason Blood and the backstory of how he got tethered to Etrigan and how that comes into the story. I also liked the ghost character Boston Brand (Nicholas Turturro), and the background of his death, though he’s described as a womanizer but we don’t get much of that when he’s actually dead. Also, I thought Boston’s “background” scene felt was too heavy-handed for an exposition scene and Jason Blood’s exposition scene for his background was handled way better.

Swamp Thing (Roger Cross) was also fun for a performance that was too brief for my liking. I liked this world because of the dark magic, and it’s well-animated, but I never had that much fun with it because it all still feels so standard even if it’s more unique than the regular Justice League. The villain, however, when (s)he was actually revealed was pretty good. I did like the whole premise about why average citizens are randomly seeing demons everywhere, too.

However, there’s just nothing memorable about this action and one scene in particular just feels like filler for the sake of it, but it’s needed because this is only 75 minutes long. I thought the finale was best when some of the other actual Justice League members came into play, like Superman (Jerry O’Connell) and Wonder Woman (Rosario Dawson). The writing’s fine, it’s not remarkable in any way but there are some good one-liners (“your ass is grass Constantine, and we’re the mower”).

The only memorable thing about any of the action is when someone anonymously summons a demon in a bathroom and all the toilets explode and a huge shit demon comes out. “Shit really hits the fan, eh?” asks Boston when he sees it, and this is Boston’s only good zinger. The demon’s gross, but the visual and idea of it won’t leave my mind anytime soon.